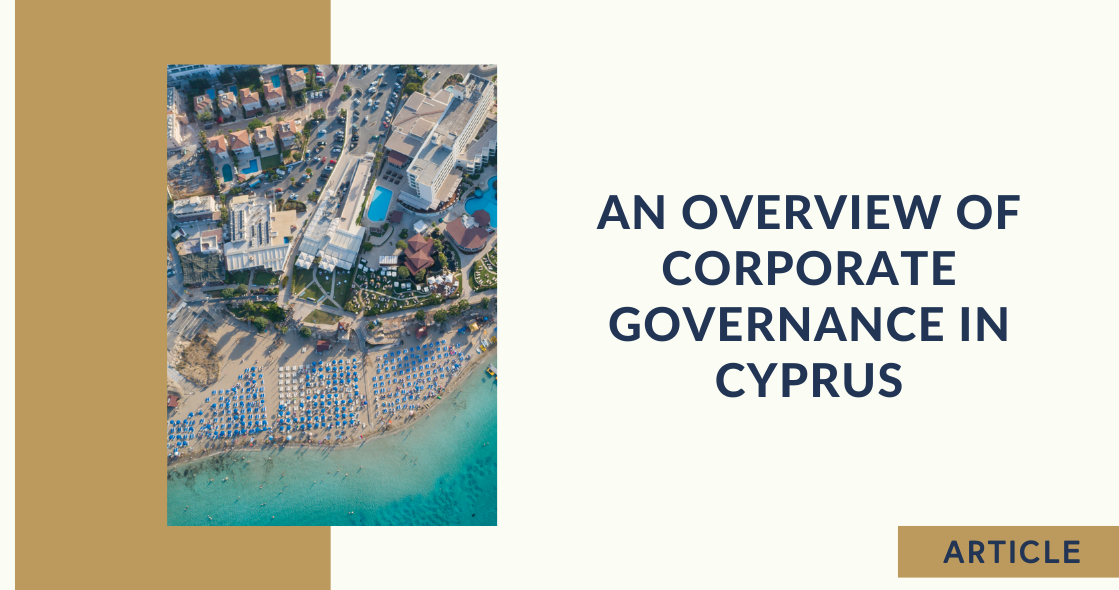 An Overview of Corporate Governance in Cyprus

Corporate governance is becoming a more fundamental and all-encompassing topic with each year that passes.  Due to the 2013 banking crisis, as a condition of international financial support the Government proceeded with economic adjustment programme, in which reform of the framework of legal and corporate governance played a large part. In April 2015 legislation was passed by the Cyprus Parliament aiming to amend the provisions of the Companies Law dealing with insolvency, and draft legislation has been submitted to the parliament to revise the office of the Registrar of Companies, with a view to improving its effectiveness in regulating companies. Consequently, this article aims to briefly examine the corporate governance in Cyprus and to give an overview of the legal regulation in Cyprus.

CORPORATE GOVERNANCE IN CYPRUS-LEGISLATION AND SUPERVISION

Corporate governance is relevant to both private and public companies; is the system by which business corporations are controlled and directed. The Corporate Governance structure covers topic such as the accountability of the Board of Directors to the shareholders, the distribution of rights and responsibilities among different participants in the corporation, such as the Company Shareholders, the Managers and the Board of Directors.

In Cyprus, the Department of the Registrar of Companies and Official Receiver (DRCOR) is responsible for the registration, compliance and winding up of companies, while the approvals for listing on the CSE are granted by the Cyprus Securities and Exchange Commission (CySEC).

CySEC is the independent public supervisory authority responsible for the supervision of the investment services market and transactions in transferable securities; its aims are to supervise and ensure investor protection and the healthy development of the market.

The main legislative provisions are included in the Cyprus Companies’ Law, Cap 113 (Companies’ Law). Common law principles also apply, such as those concerning the fiduciary duties of Company Directors.

Furthermore, CySEC issues directives and circulars regularly, supplementing the relevant regulatory framework. Its main responsibilities include the supervision of the CSE, of issuers of listed securities, the licensing of investment firms and the imposition of administrative sanctions and penalties for infringement of the stock market laws and regulations.

Moreover, due to the recession that hit the Cyprus stock market in 2000, the CSE issued the first Corporate Governance code aiming to introduce a set of corporate Governance principles, offering additional protection to the shareholders of listed companies. Currently, the fourth revised version of the code applies, which has replaced the corporate Governance code issued in March 2011 and amended in September 2012. The Code contains a set of legal principles, rather than inflexible legal rules. It is only obligatory for companies listed on the Main Market and, in part, it is also mandatory for companies listed on the Parallel Market.

The aim of the Code is to strengthen the monitoring role of the Board of Directors, to protect minority Company Shareholders, to create more transparency and to provide timely information, as well as to sufficiently safeguard the independence of the Board of Directors in its decision – making. Private companies are not bound by its provisions however are encouraged to consider it as guidance and utilise it as a best practice model.

Listed Companies have an obligation to include in their Board of Directors’ annual report to Company Shareholders, a report on Corporate Governance as follows: The Company should state in the first part of the report whether the principles of the Code are being implemented. The Company should confirm in the second part of the report that it complies with the principles of the code and, in the event that it does not, should give explanations for non-compliance with the code. With the above-mentioned as a background the following analysis intends to give a brief examination of the provisions of the code.

THE BOARD OF DIRECTORS:

The principle states that every listed Company should be managed by an effective Board of Directors, which must direct and control the Company; every director has an active duty in managing the company and exercises their duties independently and impartially, setting issues of conflict of interest between managerial staff, shareholders and board members.

The Board of Directors should be supplied in a timely manner with reliable and comprehensive information to enable it to discharge its duties; Management, chairman have the responsibility to be properly informed on issues that arise in relation to the company.

APPOINTMENTS TO THE BOARD:

Pursuant to the principle, there should be a transparent procedure for the appointment of new Company Directors to the Board. The Board should be consisted of competent individuals able to contribute on the Board of Directors of the company. Section A.4.2 of the Code provides that the appointment of suitable and competent persons should take into consideration their integrity and honesty and their knowledge and experience.

Furthermore, the principle states that at least every three years all Company Directors should resign from office at regular internal. However, they do have the right (under specific provisions) to submit themselves for re-election.

The primary sources of the Corporate Governance disclosure requirements include the Code, the Transparency Law and the Market Manipulation Law.

The Code imposes an obligation on listed companies to include in the annual report a report on Corporate Governance by the board. The first part of the report should specify whether the Company complies with the Code and the extent to which it implements its principles. The second part of the report should contain a confirmation that the Company has complied with the provisions of the Code and, in the event that it has not done so, it should specify the reasons for its non-compliance.

The Transparency Law concerns to legal entities whose transferable securities have been admitted to trading on a regulated market. A number of disclosures should be made in relation to such entities.

Furthermore, disclosure obligations are imposed by the Market Manipulation Law, which aims to eliminate insider dealing and market manipulation. According to Section 11 of Market Manipulation Law, companies that deal in financial instruments traded on a regulated market should publish inside information that directly concerns them and significantly affects the prices of the relevant instruments. Such information should be published by announcement to the CSE, which will then publish it on its website, by announcement to CySEC and by announcement on the website of the issuer.

The Board of Directors should submit a balanced, detailed and understandable assessment of the Company’s position and prospects. For instance, the Board’s responsibility is to submit all public reports, reports to regulators and information needed by legislation.

According to the principle, the Board of Directors should maintain a sound system of internal control in order to safeguard shareholder’s investments and the Company’s assets.

AUDIT COMMITTEE, AUDITORS AND COMPLIANCE WITH THE CODE

Furthermore, the principle indicates that the Board of Directors should establish transparent procedures in relation to the financial reporting, internal auditing and Corporate Governance.

THE EQUAL TREATMENT OF SHAREHOLDERS

The Practices of Corporate Governance should be based on the principal of equal treatment of all shareholders, including minority Company Shareholders.

The financial crisis in Cyprus was mainly cost by the failure of corporate Governance and risk management strategies. Therefore, the financial crisis has highlighted the importance of following Corporate Governance rules and the use of such rules as preventative measures for creating a risk-efficient economic environment. Following those rules, will enhance investor confidence and promote more transparency.