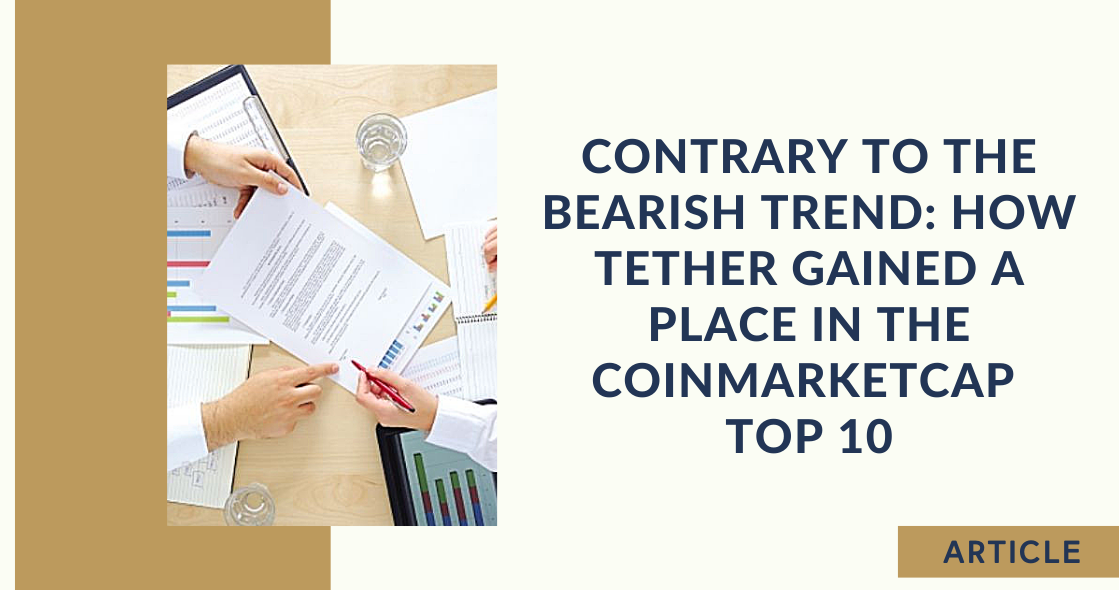 Contrary to the bearish trend: how tether gained a place in the Сoinmarketcap top 10

Tether Ltd, the issuer of Stablecoin, a type of cryptocurrency under the ticker USDT, has been hotly debated for the past year. Many representatives within the crypto-community suspect the issuer of the “tokenised dollar” regarding the insufficient supply of the currency, as well as the regular “quantitative easing” of the market during periods of recession.

For instance, researchers at the University of Texas at Austin recently concluded that the “fuel” for the rapid growth of Bitcoin during 2017 was the ongoing Tether emission. Scientists also note that USDT tokens, as a rule, are not repaid by the issuer.

Currently, this stable coin ranks second in terms of trading volume. At the same time, trading pairs ETH / USDT and BTC / USDT provide more than 56% of the daily trading volume. Since January 2017, the total issue of Tether tokens has grown from USD $10 million to $2.7 billion.

The USDT token was issued in 2015 by Tether Limited. The first integrated Bitmix Bitfinex and soon there were rumors circulating about the possible connection Tether Limited with the popular stock exchange. Thanks to the investigation into the Paradise Papers leak, the connection was ultimately confirmed.

The most famous “stable crypto currency” Tether over the past 12 months has demonstrated explosive growth, even despite a noticeable and continued decline in activity for other digital assets.

A report based on Chainalysis data showed that Tether, which is linked to the US dollar, is growing due to the fact that it has certain properties of traditional financial institutions. In other words, it is a kind of “crypto-currency bank” for traders. This crypto bank provides a stable place for the storage of funds, similar to solutions that are offered by financial institutions in the traditional fiat world. In addition, Tether makes possible unhindered, fast and inexpensive transactions within the crypto-currency ecosystem.

Currently, it is not so easy to carry out transactions between fiat and crypto-currencies. Users face significant time lags and pay high commission charges when transferring money to cryptocurrency. The explosive growth of Tether indicates that traditional financial institutions do not meet the requirements of the crypto-currency world.

However, insufficient regulation of the crypto-currency sphere has led to some unfavorable side effects. For example, Tether seems to be making possible price manipulations of low-liquidity crypto-currencies, such as Pump and Dump (P & D). This, in turn, undermines confidence in the sphere of digital assets.

It is possible that after five years, market price manipulation with low-liquidity crypto-currencies will disappear. Nevertheless, it is possible that Tether will play an important role, especially if traditional financial institutions do not develop properly. In order to do this, it is necessary for the regulatory environment, which is designed to protect and serve the participants of the developing world, crypto-currency, also changes.

Our conclusions about Tether are based on the following key theories:

During the past 12 months, the activity associated with Tether has exponentially grown, while at the same time, other crypto-currencies fell. Trading volumes in pairs with USDT on the exchanges that support this stable coin have grown more than 15 times during the period from October 2017 to March 2018. The volume of trading in pairs with the US dollar on non-Tether-supported sites rose by only three times during the same period.

Tether acts as a crypto-currency bank for traders, allowing individuals to store a currency with a stable exchange rate at about 30 exchanges. Nevertheless, a significant recovery is observed only at ten trading floors. After the issue, all tokens pass through the trading platform Bitfinex, which is Tether’s only direct customer. After that, 80% of the freshly released USDT are sent to seven exchanges. 73% of Tether’s transaction transactions are addressed to exchanges, with only 27% coming from trading platforms. This indicates that most of the USDT is used for trading.

Over the past 12 months, the activity associated with Tether has changed. From trade to top-end bitcoin and Ethereum, the emphasis shifts more and more toward low-liquidity crypto-currencies, and at times to the Pump and Dump schemes. The nature of the use of Tether has changed over the past year. During January 2018, the volume of Tether’s transaction transactions closely correlated with similar indicators of Bitcoin, Ethereum and Litecoin (the degree of dependence reached 75%). This suggests that for a while, market participants preferred top-end crypto-active assets. However, since early 2018, Tether’s transaction volumes have increasingly correlated with newer, less recognised crypto-currencies such as EOS, NEO, Decred, etc. The results of the analysis of trading pairs indicate that Tether is used for “pumping and dumping”. The share of USDT, used for trading in low liquidity crypto pairs, increased from 6% in November 2017 to almost 20% in April 2018.

Over the past 12 months, Tether-related activity has exponentially increased. This has been especially noticeable this financial year amid a recession in other crypto-currencies.

Since mid-2017 there has been an exponential growth in trading volumes and transactions, as well as the number of Tether tokens issued. In January 2018, during a one-week period, Tether’s transaction volume reached USD $1.5 billion. This happened shortly after the peak of the crypto currency boom when the price of Bitcoin approached USD $20,000. However, unlike other cryptocurrencies, Tether volumes continued to grow even until the end of May. On May 1st, the number of online transactions reached a historic high, approaching the 50,000 mark.

During the first half of 2018, there was an exceptionally strong revival of activity associated with Tether. Nothing of the sort happened with other crypto-currencies. If at the end of last year the leading digital assets experienced large spikes in volumes, then 2018 was marked by continuing sales.

A similar trend is indicated by data on trade volumes. In 2018, the turnover of exchanges supporting this stable coin increased. Such dynamics are not observed on stock exchanges where USDT is not represented. At the same time, it is difficult to determine the role of Tether alone in this growth. However, of course, this coin contributed to the growth of liquidity in the market.

Tether is a crypto-bank for traders, since it allows private individuals to store a coin with a stable exchange rate at about 30 exchanges. At the same time, the greatest activity is concentrated in less than ten trading floors.

Growth will seem even more striking, especially given that the main activity occurs on just a few exchanges. Chainalysis confirmed that all Tether Treasury-released stable coins go through Bitfinex. After that, 80% of the coins are transferred directly to several exchanges that accept USDT: Bittrex, Poloniex, Huobi, OKEx, Binance and Kraken.

The role of Tether in the success of these exchanges is obvious. This suggests that there is a significant need in the market for a stable currency, which stimulates digital trading activity.