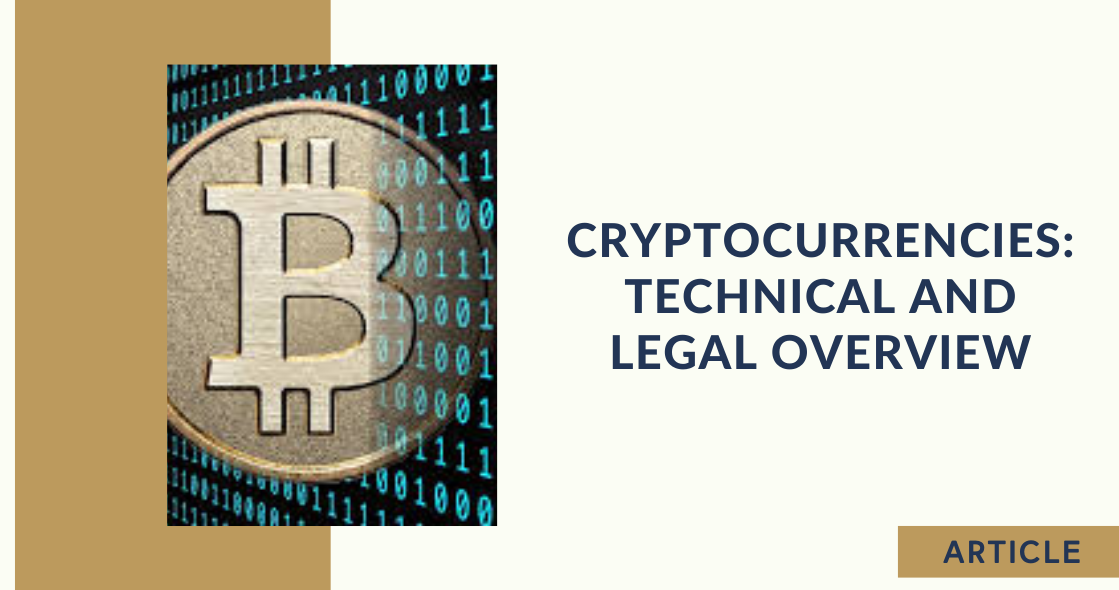 In this article, we will try to succinctly describe the technical and legal characteristics of Cryptocurrencies. The understanding of Cryptocurrencies is crucial for today’s modern payment services and investment opportunities around the world. We have seen the increasing importance that this topic has acquired in the last few months and the rise of the price of the most popular type of Cryptocurrency, the Bitcoin, from $0.06 cents of a dollar in 2010 to $5,518.85 by the 25th of October, 2017.[1]

The technical approach is necessary to understand how a Cryptocurrency works and what opportunities it may present for investors and the way we perform transactions internationally. Additionally, a legal approach, with the regulatory framework is also necessary to understand such opportunities and how to better benefit from such in compliance with the laws and regulations in key jurisdictions.

Cryptocurrencies or virtual currencies (used indistinctively for the purposes of this article) are, in general, defined as: “a digital currency in which encryption techniques are used to regulate the generation of units of currency and verify the transfer of funds, operating independently of a central bank”[2]. The Internal Revenue Service (IRS) of the United States has defined Cryptocurrencies as: “a digital representation of value that functions as a medium of exchange, a unit of account, and/or a store of value”.[3] Furthermore, the Financial Action Task Force (FATF) of the United Arab Emirates establishes the most detailed definition found so far, where, in summary, it states that Virtual Currencies[4] fulfills its functions only by agreement within the community of users and is different from E-money as E-money is an electronic representation of fiat currencies used electronically.  We can agree that Cryptocurrencies are a representation of value, and more importantly, we must add that a Cryptocurrency is a currency secured through Cryptography.

Defining Cryptography[5] and its particularities would require an extensive length of description and study; for this article, we will simplify the definition of Cryptography, in simple words, Cryptography is: a mathematical solution for computer systems security that uses a mathematical protocol composed by hash functions, inputs and outputs that secure the information generated into a ledger.

The ledger is an information registry of transactions and a combination of ledgers form a block. This block is part of chain of blocks of ledgers secured by Cryptography named “Blockchain”. The ledgers are recorded by several independent people at the same time through what is called Distributed Ledger Technology[6] and they can submit their ledgers in the form of blocks into the Blockchain by applying the hash functions to solve input data and obtain the output data correctly. This operation receives the name of “mining”, which is rewarded by Cryptocurrencies such as Bitcoin in the form of virtual currency added into their accounts, better known as “Wallets”.

Due to the increased importance of Cryptocurrencies around the world and its incredibly fast development, some governments are laboriously trying to regulate the Cryptocurrencies, the Distributed Ledger Technology (DLT) and/or the popular Initial Coin Offerings (ICOs) or at least assess the impact of regulation in their economies.

However, in Central and South America a few governments have taken different approaches or absolutely none. In Central America no country has officially permitted, regulated or prohibited Cryptocurrencies. In South America, Ecuador has expressly prohibited the emission, production and use of Cryptocurrencies; however, it has stated the creation of its own digital currency backed by the Ecuadorian Central Bank[8]. Along the same lines, Bolivia has also expressly prohibited Cryptocurrencies but, differently than Ecuador, has no foreseeable plans to issue its own Cryptocurrency.[9] On the other hand Chile, Peru, Uruguay, Paraguay, Venezuela, Suriname, and Guyana have an unclear status with no public statements or regulations regarding Cryptocurrencies. Argentina, Brazil and Colombia, from the other side, are permissive of Cryptocurrencies and related transactions and more specifically, Argentina and Brazil do tax activities related to Bitcoin clearly through the application of Income tax and Value Added Tax (VAT); lastly in the region, Colombia remains with an unknown tax treatment on Cryptocurrencies.

Moving on to the European continent, most of the countries are permissive of Cryptocurrencies, with the exception of Bosnia and Herzegovina, Montenegro, Albania, Macedonia, Kosovo, Serbia, Romania, and Moldova. Where Cryptocurrencies are permitted, certain regulations regarding Anti-Money Laundry and Counter-Terrorism Financing may apply. Two jurisdictions stand out as more lenient towards Cryptocurrency, Malta, and Gibraltar. Malta is going to implement a sandbox test within the Gaming authority to test the economic impact of regulating Cryptocurrencies.[10] Gibraltar, on their side, has proposed a bill to its parliament for a license scheme to be applicable from early 2018 if passed.[11]

In Eastern Europe, only Russia presents itself more actively involved in the attempt to regulate Cryptocurrencies and apparently making an effort to implement its own. No concrete regulation has been approved yet; however, it will be interesting to see further developments.

As for the African continent and the Middle East, most of the countries are neutral in terms of Cryptocurrencies. Nevertheless, Israel – the start-up Nation – is expecting to have a report by a committee confirmed by the Israeli Securities Authority (ISA) at the end of 2017, where the commission will evaluate the financial impact of ICOs and the legitimacy of Bitcoin, among other aspects. Likewise, the South African government is another active participant in looking into what regulations of Cryptocurrencies or the lack thereof, would mean for the country. With attempts to implement sandbox testing within the South African Reserve Bank, South Africa is definitely curious but hesitant at this stage. Moreover, the United Arab Emirates, as referred to above, has taken important steps towards regulating Cryptocurrencies. Currently, it does not regulate Cryptocurrencies as such but it does regulate firms that issue Cryptocurrencies as securities on a case-by-case basis.[12]

In Asia, Cryptocurrencies have been widely accepted except for one of the most important markets in the region, China. The People’s Bank of China, the Ministry of Industry and Information Technology, the Ministry of Industry and Commerce, the Banking Regulatory Commission and the China Insurance Regulatory Commission issued a joint statement where they declared the “fundraising through Cryptocurrencies” as illegal in the territory of China and it prohibits any organization or individual in engaging in unauthorized issuance of tokens for financing purposes. This prohibition is extended to financial institutions and other non-bank payment institutions such as WeChat, one of the biggest communication and social network platforms in China that currently also handles money transactions between users.[13] Nevertheless, Hong Kong has a more flexible approach towards regulating Cryptocurrencies, according to an official announcement from the Securities and Futures Commission of Hong Kong (SFC), Cryptocurrencies are not securities by nature; however, under ICOs and other collective investment schemes might be regarded as securities and, therefore, regulated by the SFC.[14]

On the other hand, another important market in the Region, Japan, has recently issued amendments to its regulations aimed at registering Cryptocurrencies issuers since April this year through the amendments to the Payment Services Act, whereby, it considers Cryptocurrencies as a Prepaid Payment Instrument.[15]

Last but not least, in South Asia and Oceania, Cryptocurrencies are being regulated through different instances such as tax legislation and Anti-Money Laundering and Counter-Terrorism Financing regulations; such is the case of Australia[16], Singapore[17]  and the Philippines[18]. Separately, in Indonesia, the Bank of Indonesia has clearly stated that Cryptocurrencies are not a legal payment method, without regulating it expressly.[19]

Conclusively, the outlook of Cryptocurrencies from a regulatory approach is uncertain; however, countries are inclined to take four different actions, 1) assess the impact of regulation on Cryptocurrencies, 2) tax the operations, 3) insert them into a category of security or commodity and 4) take no action at all.

At Eltoma Corporate Services we can assist you with any specific inquiries that you might have in this regard. Our team of professionals is continuously revising relevant information in this field and is able to assess your business situation with most up-to-date and accurate information.

[4] Financial Action Task Force (FATF) of the United Arab Emirates, ICO Guidelines, October 8th, 2017: “a digital representation of value that can be digitally traded and functions as (1) a medium of exchange; and/or (2) a unit of account; and/or (3) a store of value, but does not have legal tender status (i.e., when tendered to a creditor, is a valid and legal offer of payment) in any jurisdiction. It is not issued nor guaranteed by any jurisdiction and fulfills the above functions only by agreement within the community of users of the virtual currency. Virtual currency is distinguished from fiat currency (a.k.a. “real currency,” “real money,” or “national currency”), which is the coin and paper money of a country that is designated as its legal tender; circulates; and is customarily used and accepted as a medium of exchange in the issuing country. It is distinct from money, which is a digital representation of fiat currency used to electronically transfer value denominated in fiat currency. E-money is a digital transfer mechanism for fiat currency—i.e., it electronically transfers value that has legal tender status.” Available here

[13] Joint Statement from the Regulators in China, available here