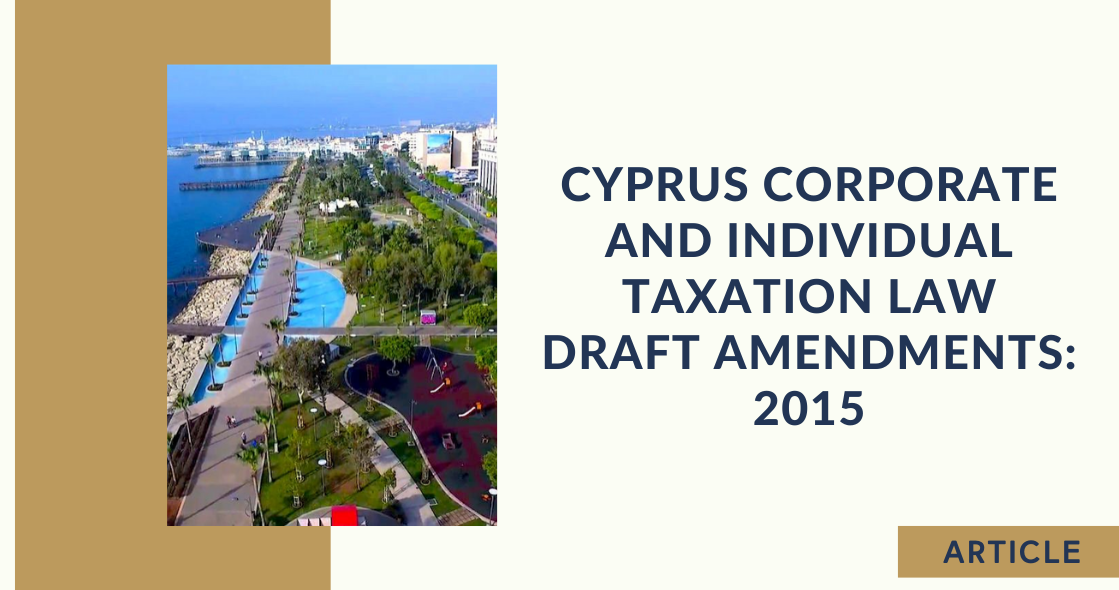 On July 1st 2015, the President of Cyprus Nikos Anastasiadis, has officially declared that the Cyprus taxation system needs rapid changes to increase the level of the country’s competitiveness.

In order to achieve this goal, a number of amendments should be made to the tax law. On July 9th, 2015 members of Cyprus Parliament have approved the main amendments as suggested by Mr Anastasiadis.

BASIC PROVISIONS OF CYPRUS CORPORATE AND INDIVIDUAL TAXATION LAW INCLUDE THE FOLLOWING AMENDMENTS:

• Companies will be granted the right to charge (and to deduct from taxation base) interests on the funds received as a contribution to the capital (“noting interest deduction”).

• Investment income (i.e. dividends, interests) of individuals not domiciled in Cyprus will be exempt from tax.

• The tax exemption period provided by the current Cyprus legislation with regards to expatriates’ income over €100,000 will be extended.

• Accelerated tax depreciation referred to buildings, cars and equipment will be extended to 2016.

• Future profits received from the sale of property purchased no later than the end of 2016 will be exempt from tax.

• The amount of fees collected from land cession will be reduced by half till the end of 2016.

The amendments to the tax law of Cyprus are aimed at considerable reduction of the overall tax burden for Cyprus companies and individuals, as well as to increase the Republic’s investment appeal.

The given resolution, i.e. granting the right to reduce the taxation base at the amount of noting interest expenses accrued, is aimed at boosting new investments and decreasing the tax burden of the corporate sector in Cyprus.

Just as loan agreement interest expenses, noting interests are calculated using the multiplication of a noting interest rate by new investments into a company’s capital. This initiative focuses on reducing debt investment for Cyprus companies , as well as on the procurement of new deposits to Cyprus’ companies, i.e. on increase of Cyprus competitiveness as a world financial centre.

INVESTMENT INCOME (I.E. DIVIDENDS, INTERESTS) OF INDIVIDUALS NOT DOMICILED IN CYPRUS WILL BE EXEMPT FROM TAX.

As per the amendments, individuals not domiciled in Cyprus, are exempt from taxation of investment income gained in the form of passive interests or dividends. Moreover, revenues from the leasing of property, as well as other rental income of individuals not domiciled in Cyprus will be subject to income tax, i.e. will not be claimed for special contribution for defence.

The current tax law in Cyprus currently allows for tax exemption of income received from the sale of financial assets’ (e.g. shares or bonds) issued by companies. Income from the sale of other titles is also exempt, except for cases when a real estate in Cyprus is owned by a company.

TAX EXEMPTION PERIOD PROVIDED BY THE CURRENT CYPRUS LEGISLATION AS REGARDS TO THE EXPATRIATES’ INCOME OVER €100,000 WILL BE EXTENDED.

According to the current legislation in Cyprus, 50% of the income from an employment which is carried out by an individual in Cyprus is exempt from paying tax for a period of 5 years, providing that the individual was not a resident before the commencement of such employment in Cyprus and the total remuneration of the employee exceeds €100,000 per annum. This rule applies to labour relations which arose after January 1st, 2012. The adopted bill extends the validity of tax exemption to ten years.

In general, the maximum rate of an income tax for individuals in Cyprus is 35%. However if 50% exemption principle is applied, the effective tax rate on expatriate’s income will range from 8% to 17.5%. Hence adoption of this amendment makes Cyprus even more attractive for high net-worth individuals (HNWI).

ACCELERATED TAX DEPRECIATION REFERRED TO BUILDINGS, CARS AND EQUIPMENT WILL BE EXTENDED TO 2016.

FUTURE PROFITS RECEIVED FROM THE SALE OF PROPERTY PURCHASED NO LATER THAN AT THE END OF 2016 WILL BE EXEMPT FROM TAXATION.

Before approval of the amendments had taken place, income from the sale of Cyprus-based property was subject to a 20% rate tax deduction (Capital Gains Tax or CGT). The adopted bill grants tax exemption for profits received from sale of property until the end of 2016. As per Eltoma Corporate Services, the amendment will increase investments into the Cypriot real estate market.

The adopted bill provides a 50% reduction on the amount of fees collected as a result of land cession. This allowance will apply for the land plots acquired until the end of 2016. To conclude, it is worth noting that the amendments are designed to make Cyprus even more  competitive, fair and attractive for investors than it was before. The Cyprus government believes that these changes will have a positive impact on country’s economy.

* The next set of legislative measures will be considered by the Cyprus parliament  in the middle of September, 2015.