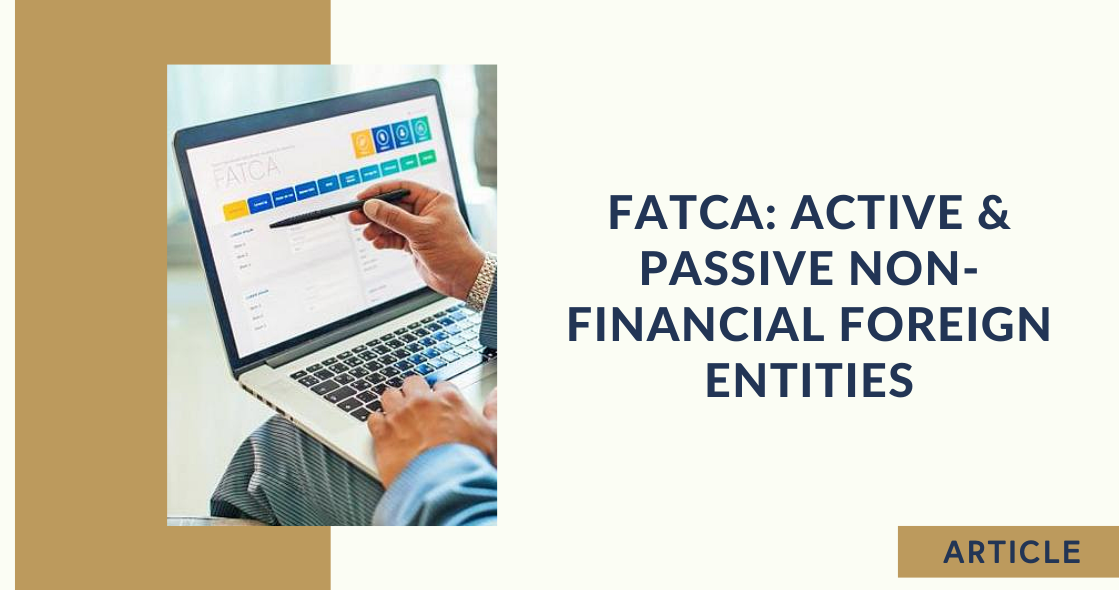 This Act is becoming increasingly important and has as its main initiative the monitoring of the financial accounts of the persons who live outside the United States or whether US citizens, currently residing in the US or not, have earnings they do not report to the Inland Revenue Department.

In general terms, FATCA aims to enable reporting of foreign financial assets, to find US person with accounts at FFI’s and find those that hide behind certain types of non US structures. Within the category of the Foreign Financial Institutions, one may find Banks, Depositories, Custodial, Investment Entities, Specified Insurance Companies, Certain Holding Companies or Treasury Centres.

In order to identify if an NFFE is active or passive there are certain criteria the entity must meet.

When less than 50% of the NFFE’s gross income for the preceding year or other appropriate reporting period is passive income and when less than 50% of the assets held by the NFFE during the preceding year or other appropriate reporting period are assets that produce or are held of passive income.When the NFFE is a Related Entity and/or when its stocks are traded on an established securities market.When the NFFE is organised in a US territory or when the owners of the payee are good residents of that territory.When the NFFE is a non US Government, or a political subdivision of that Government, or a public body or political subdivision performing a function of such Government,  or a Government of a US Territory, or an International Organisation, or a non-US central bank or an entity wholly owned by one or more of the previously mentioned.When the NFFE’s activities involve holding outstanding stocks and provision of services and financing to subsidiaries that engage in different businesses from those of the Financial Institution. However the entity will be considered as Passive NFFE in instances when it functions as an investment fund with main purpose to acquire or fund companies so as to hold interest in those companies as capital assets for investment purposes.When the NFFE is not nor has ever operated a business in investing capital into assets with the intention to operate a business different from the business of a Financial Institution.When the NFFE was not a Financial Institution the past five years, if it is liquidating its assets or if it is reorganising its activities with the intent to operate in fields other than that of the Financial Institution.

When the NFFE’s gross income consists of dividends and interest.When the NFFE’s gross income is equivalent to interest and amounts received from insurance contracts based on the performance of the pool.When it consists of rent and royalties or annuities.When the excess of gains over losses for property sales, transactions in commodities and foreign currency losses brings forward passive income.When the entities’ net income comes from notional principle contracts.When the amounts earned are under value insurance contracts or when these amounts are earned from insurance companies with its reserves for insurance and annuity contracts.

Amounts excluded from any calculation of Passive Income: