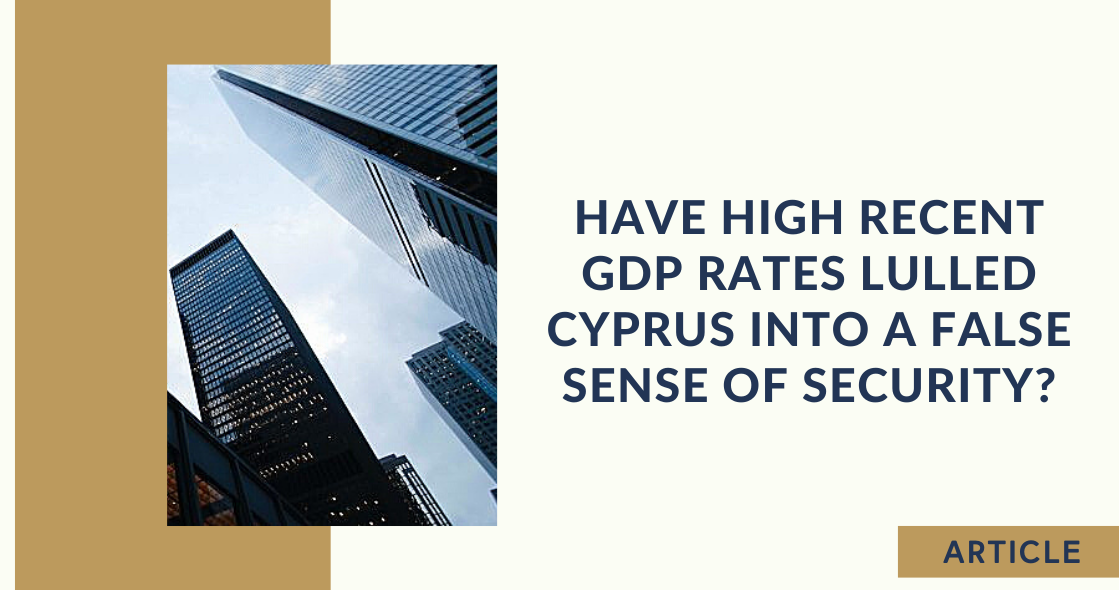 Have high recent GDP rates lulled Cyprus into a false sense of security?

The Cyprus government, for the last few years have been harping tales of steady growth and booming tourism levels; referring to the relatively high rate of growth of real GDP can be attributed to a number of factors: Declining official unemployment rates; excesses in the government accounts and the raising of large fund backing in international financial markets.

However, these levels of success have been offset by a number of more insidious and influential long-term figures:

Additionally, the structural arrangement of economic growth has generously benefitted limited segments of the population, while disposable incomes of low-middle level households have remained consistently stagnant, it has further perpetuated wealth inequality on the island.

As new graduates continue to suffer from underemployment and low wages in the face of high and rising housing costs, so too do the generational inequality levels in Cyprus.

Using GDP to assess the health of an economy is common practice, the Cyprus government used these figure to assess how hijacked policy-making, most notably in the failure to address the huge debt overhang and the socio/economic inequalities cited above, as well as in the cutting-back of development expenditures required to sustain healthy economic growth.

Moreover, with the pattern of growth based mainly on government-backed private-sector consumption, difficulties are likely to erupt in the high-end property market after sustaining the current pace of GDP growth (a property bubble).

The Main Drivers of Economic Growth

Regarding general expenditure, private consumption has been the main source of GDP growth being financed to a considerable extent by households failing to repay their loans even when they had the financial capacity to do so (this is called strategic defaulting).

Worryingly, Cyprus is the only EU member where households have recorded negative saving rates since 2014. If debtors including the strategic defaulters are forced to save more and accelerate repayment of their loans through policy measures; their account balances also remain low, which in turn could substantially shorten the growth of private consumption.

In 2019 and 2020 the growth of the tourist sector is likely to slow down from its overestimated high-level as a result of the depreciation of the pound sterling against the euro. As the prices for accommodation increases, many UK tourists are choosing destinations closer to home such as Spain and Portugal; while Russian holidaymakers are choosing the increased competitiveness of neighbouring destinations such as Turkey.

Policy measures to promote the property sector, especially through the investment for citizenship scheme, have largely boosted the construction sector and related services including those of Accountants, Real Estate Agents and Solicitors.

However, it is contentious whether the recent abrupt rise in construction and real estate activity that has steadily crept up over the past 10 years can continue, particularly as the European Union has been placing more pressure on Cyprus to phase out the Cyprus Investment Programme (CIP).

HAVE THE GOVERNMENT NEGLECTED THEIR POLICIES?

Even without a substantial weakening in the main drivers of economic growth, the economy faces major problems in leveraging its medium to longer run potential in order to generate equitable growth.The foundations for sustaining economic growth in the form of physical infrastructure and human capital are being exhausted through declining government expenditure within the public education sector.

Failure to effectively deal and reduce the huge amount of private debt, much of which are classed as non-performing (NPLs), which means that banks have little room to financing productive investments for clients with stable credit histories.

Fundamentally, it seems to be the inequalities, particularly between generations that are being fostered by government policies and the lack thereof that are damaging the potential of the Cyprus economy to enhance the well-being of the bulk of its population. More specifically, new graduates, unlike the generation before them; are finding it difficult to secure jobs that line up with their education and skills. While the unemployment rate is declining, most modern jobseekers cannot find employment in their field of study.

New graduates entering the market in Cyprus are now forced to either migrate; accept jobs that they are overqualified for with low wages; or face being unemployed, in the process of being useless in fulfilling their potential to contribute to the island’s economic growth.

THE GROWING COST OF LIVING IN CYPRUS

Also, with high housing costs in urban and tourist areas new graduates cannot afford mortgages for housing and the ever-growing costs of starting a family, therefore lessening the growth of the Cypriot population.

Experts are saying that the following are reasons for passing on costs, including the burden of debt to the new and future generation of honest Cypriot taxpayers: