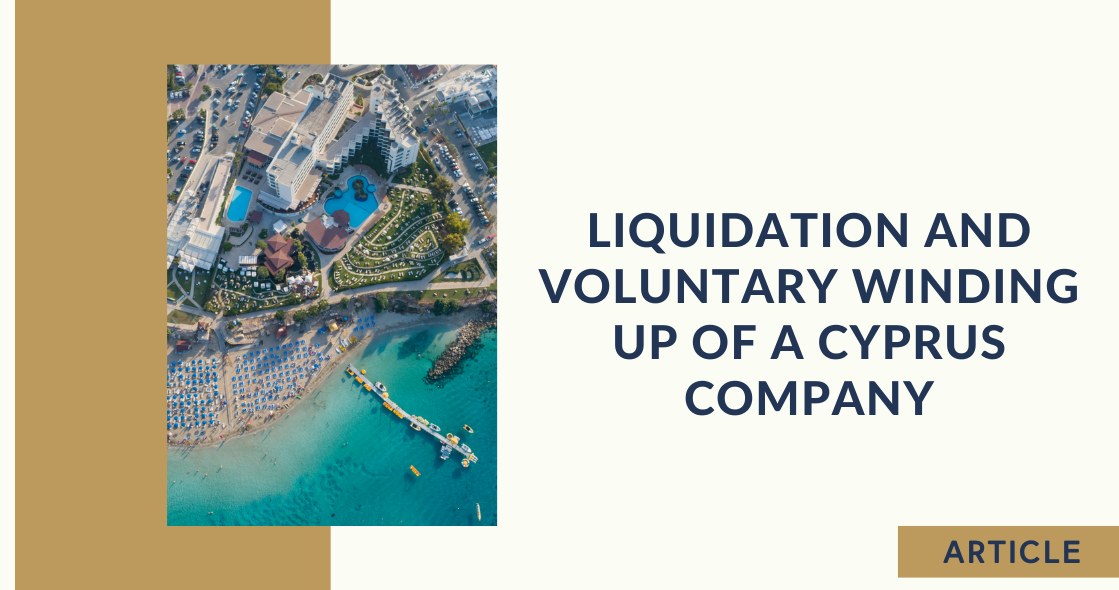 Liquidation and voluntary winding up of a Cyprus company

A Cyprus company might decide to wind up as a result of various reasons and such procedures may be a challenging and lengthy task. The difficulties faced and time to complete is dependent upon many factors, including how well the company has been managed and administered throughout its existence, the method chosen for closing down and who performs such a processes.

There are actually two main methods of dissolving a Cyprus Company:

The strike off procedure is a relatively simple method of closing down a Cyprus company and is typically used for dormant companies that have ceased their activities and no longer have any assets or liabilities.

In order to strike off a Cyprus company, the following requirements must be met:

(i) The financial statements of the company must be prepared until the date the company ceased activities.

(iv) The statement of affairs must be prepared to show that the said company has sufficient funds to discharge its debts, including the fees for the strike off.

(v) The said company must close any open bank accounts to any bank held offshore, worldwide.

(vi) The said company must be de-registered from the V.A.T.

(vii) Payment of annual levy for any pending year.

This procedure takes approximately 4-9 months to be completed.

If the Registrar does not receive any reply, he will proceed with the publishing and he will send a letter to the said company informing it that within 3 months from the receipt of the letter, the company will be struck off, unless there is a reason for the contrary.

It is worth noting that the Registrar of Companies and Official Receiver announced on the 27th day of May 2014, that failure to submit the Annual Return will result in the deregistration of the company from the Register in accordance with article 327 of the Companies Act. (Cap. 113).

Also recently the Registrar has announced that as from 29th day of September 2014 notices will send notifications to all Companies that have not filed their Annual Returns (HE32).

(b) The company resolves by special resolution that the company should be wound up voluntarily.

(c) An extraordinary resolution is passed to the effect that the company cannot by reason of its liabilities, continue its business and that it is advisable to be wound up.

This method is usually used when there is a need for a liquidator to be formally appointed in order to distribute certain assets, primarily for tax reasons.

“Declaration of Solvency” is a statutory declaration made by the directors of the said company stating that they have made a full inquiry into the affairs of the company and having done so, they have formed the opinion that the company will be able to pay its debts in full within a period not exceeding 12 months from the commencement of the winding up.

CONSEQUENCES OF THE DECLARATION OF SOLVENCY

PROCEDURE OF THE MEMBER’S VOLUNTARY WINDING UP

Strike offMembers voluntary wind upEasiest and cheapest methodMore complex and costlyApproximately 4-9 months in order to be completedApproximately one year or moreIf a company or any member or creditor of the company feels aggrieved by the company having been struck off the register, the court on an application made before the expiration of 20 years from the publication in the Gazette of the notice for the strike off, may restore the said companyWhere a company has been dissolved, the Court may at any time within 2 years of the date of dissolution on an application being made for the purpose by the liquidator of the company or by any other interested person, make an order declaring the dissolution to be made voidNo liquidatorLiquidator is appointedTypically used for dormant companiesNot applicable to dormant companies

Our experienced staff are more than happy to assist as to which method are applicable to any purpose and can help with the liquidation process for any business.