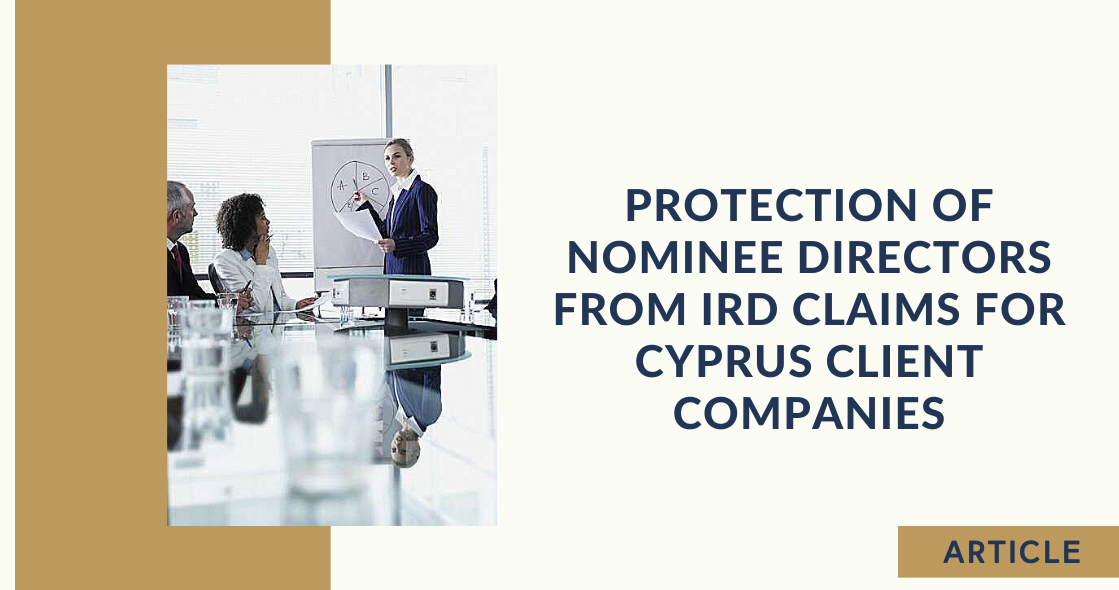 According to Article (2)(g) of the Income Tax Law (Law No. 118(I) of 2002, as amended) ‘‘resident in the Republic’’, when applies to a company, means ‘‘a company whose management and control is exercised in the Republic.’’

However, there is no specific definition either in the Income Tax Law or in any other Cyprus law as to what constitutes ‘‘management and control’’. Therefore, Tax Authorities follow the definition in relation to ‘‘the place of effective management’’ of the OECD (Organisation for Economic Cooperation and Development) model (OECD serves as a guideline for establishing tax agreements).

According to the definition ‘‘the place of effective management will ordinary be the place where the most senior person or group of persons (for example Board of Directors) takes its decisions, the place where the actions to be taken by the entity as a whole are determined’’.

Therefore, as a minimum criterion for defining ‘‘the management and control’’ is the place where the Board of Directors meets and takes decisions. In order to facilitate this, Tax Authorities suggest that all directors or at least the majority of directors should be Cyprus Residents. Hence, the Tax Authorities during the issuance of Tax Residency Certificate require the submission of an application which must be signed by the Director of the Company who declares that:

(a)    The majority of the Board of Directors meetings take pace in Cyprus.

(b)   The Board of directors exercise control and make key management and commercial decisions necessary for the company’s operations and general policies.

(c)    The minutes of the Board of Directors are prepared and kept in Cyprus.

(d)   The majority of the Board of Directors are tax residents in Cyprus.

In addition the Director of the Company, along with his/her signature, has to complete his/her Tax Identification Code, as proof of his/her Cyprus residence.

However, a person is not to be regarded as a shadow director by reason only that the Directors act on advice given by him in a professional capacity.

The Criminal Code also creates a more serious offence for directors of a company for making false statements with intent to defraud or induce any persons to become a member or to advance money to the company and provides for a seven years term of imprisonment.

According to Article 20(c) of the Cyprus Criminal Code, a Director can be prosecuted as person who aids or abets the company in committing an offence.

Millet J held that ‘‘Directors of the parent [company] were not shadow directors of the subsidiary, just by being members of the parent company’s board. It would need to be shown that they personally instructed and directed the subsidiary’s board. The first step is to identify the de jure and de facto directors, then to say that they had been directed, and consequently that the real Directors acted in accordance with the directions, and then that they were accustomed to do so. For instance there must be a pattern ‘in which the board did not exercise any discretion or judgment of its own but acted in accordance with the directions of others.…

Millet J has also given the definition of shadow director: ‘‘Shadow director”, in relation to a company, means a person in accordance with whose directions or instructions the directors of the company are accustomed to act. Nevertheless, the statutory liability is imposed exclusively upon directors of one or other of the three kinds that I have mentioned (de jure, de facto, shadow Directors)’’.

A shadow director, by contrast, does not claim or purport to act as such Director. On the contrary, he claims not to be a director. He lurks in the shadows, sheltering behind others who, he claims, are the only directors of the company to the exclusion of himself. He is not held out as a director by the company. To establish that a defendant is a shadow Director of a company it is necessary to allege and prove:

(1) who the Directors of the company are, whether de facto or de jure.

(2) that the defendant directed those Directors how to act in relation to the company or that he was one of the persons who did so.

(3) that those directors acted in accordance with such directions and

(4) that they were accustomed so to act. What is needed is, first, a board of Directors claiming and purporting to act as such; and, secondly, a pattern of behaviour in which the board did not exercise any discretion or judgment of its own, but acted in accordance with the directions of others.

It was also stated that: ‘‘Those who assume to act as directors and who thereby exercise the powers and discharge the functions of a Director, whether validly appointed or not, must accept the responsibilities which are attached to the office’’

According to Companies Act (Section 170(5)) the general duties of the directors apply to shadow directors to ‘‘to the extent that the corresponding common law rules or equitable principles apply’’.

In the majority of the cases, shadow Director is treated as a real Director and is bound by the same duties and obligations.

Reference from Snell’s Equity 33rd edition (2015): ‘‘…Company Directors have also consistently been held to owe fiduciary duties to the company. This includes de facto directors and will also include shadow directors.’’

Lewison J. stated that a shadow director who does not directly deal with the company’s assets does not owe the company any fiduciary duties; e.g. he has no duty to act in the best interests of the company or to not financially profit off of his position.

However, certain specific statutory duties and prohibitions are imposed on a shadow Director.

The Court stated that although the defendant was not formally a Director, he was a ‘‘shadow Director’’ and controlled the company’s activities and… since he had effective control over the company, he would presumably have been in a position on behalf of the company to retrieve from himself that which he had caused to be paid for his benefit

To summarise, an individual is not regarded as a shadow Director solely because the Company Directors act on the advice given by that individual in a professional capacity. There are various exceptions and whether or not a person is a shadow director is a question of fact and dependent upon all the relevant circumstances.