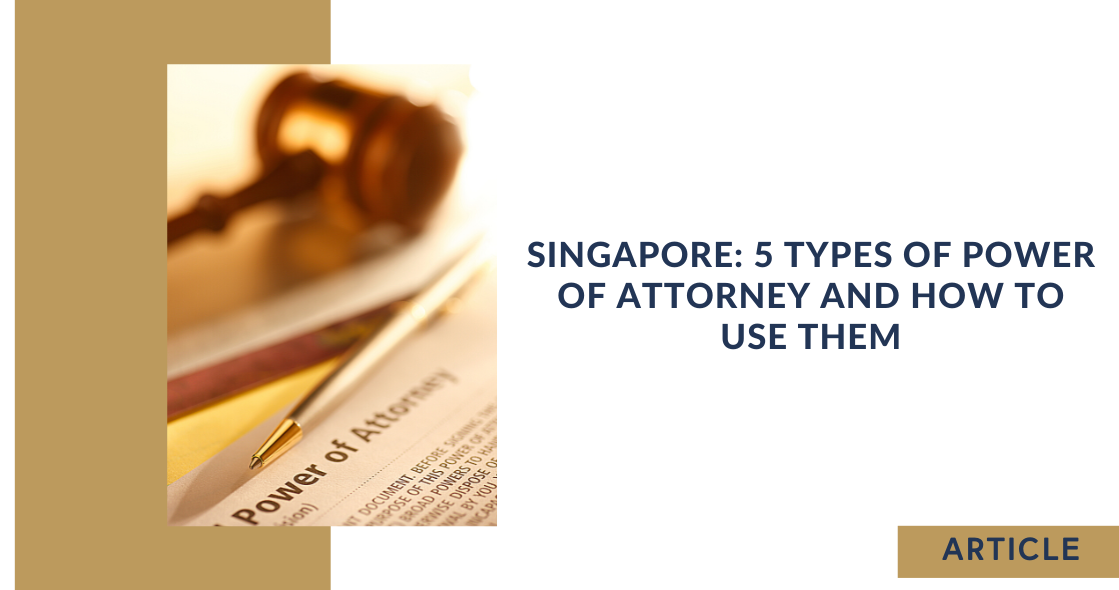 Singapore: 5 types of Power of Attorney and how to use them

There are several types of POA, each with different functions. Powers of Attorney are used in a wide variety of transactions. For example, a donor may delegate administrative authority to a donee using a POA. The Power of Attorney may provide for the powers granted to the authorised person and restrictions on such powers.

The Power of Attorney formed in a foreign state should be valid in the jurisdiction in which it will be used, even if the requirements of a foreign state are observed. In this article, we will discuss 5 types of POA and cases of their use:

The General POA is usually valid until withdrawn by the person who issued it, in the event of the death or incapacity of the donor or in case of an event indicated in the POA itself.

A Specific POA (also known as a non-durable POA) grant powers over certain matters. The authorised person may act only on behalf of the person who issued the POA concerning the above issues.

A Lasting Power of Attorney (LPA) is a legal document that allows a person 21 years old or older to plan how to manage their affairs if they become incapacitated.

In the LPA, the donor appoints one or more donees to act and make decisions on his/her behalf in the event of mental incapacity. The donee is empowered to make decisions about the personal well-being and/or property and financial issues of the person who issued the POA.

The issuer of the certificate must certify the LPA form, thereby confirming that the donee understands the purpose and consequences of the enduring POA. It is also done to ensure that no fraud or undue pressure is used to induce the creation of the LPA.

A practising lawyer, psychiatrist or accredited medical practitioner can issue a certificate. The certificate issuer usually charges a certification fee.

The most common type of POA in Singapore is the HDB Power of Attorney. An HDB Power of Attorney is required when the homebuyer is unable to show up to the meeting to pick up the keys. It is most commonly used when signing legal documents where the party cannot be present in person at the signing. These documents include: Sales agreement, Option to Purchase, Lease Agreement, Deed of Assignment, Lease-in-Escrow, Mortgage-in-Escrow.

HDB Powers of Attorney are commonly used when a party resides overseas and is unable to personally sign the documents in Singapore, in which case he/she appoints an attorney to act on his/her behalf.

To prepare a power of attorney, you will need to involve a lawyer. The HDB Power of Attorney will give the donee powers such as the right to sell, process paperwork or return money to the Board of the Central Insurance Fund (CPF).

A Springing POA, also known as a conditional Power of Attorney, can be drafted so that it only takes effect under certain circumstances. For example, the Power of Attorney may only empower the donee if the person issuing the POA travels abroad.

Since the creation of the POA entails legal procedures and issues of law, it is recommended to involve a lawyer in drafting and signing it. Do you need a lawyer to prepare the Power of Attorney? Eltoma specialists have the necessary knowledge, experience and qualifications to prepare any types of POA you need in Singapore. You can contact us by mail at info@eltoma-global.com or by phone numbers listed on the website. We are waiting for your requests!