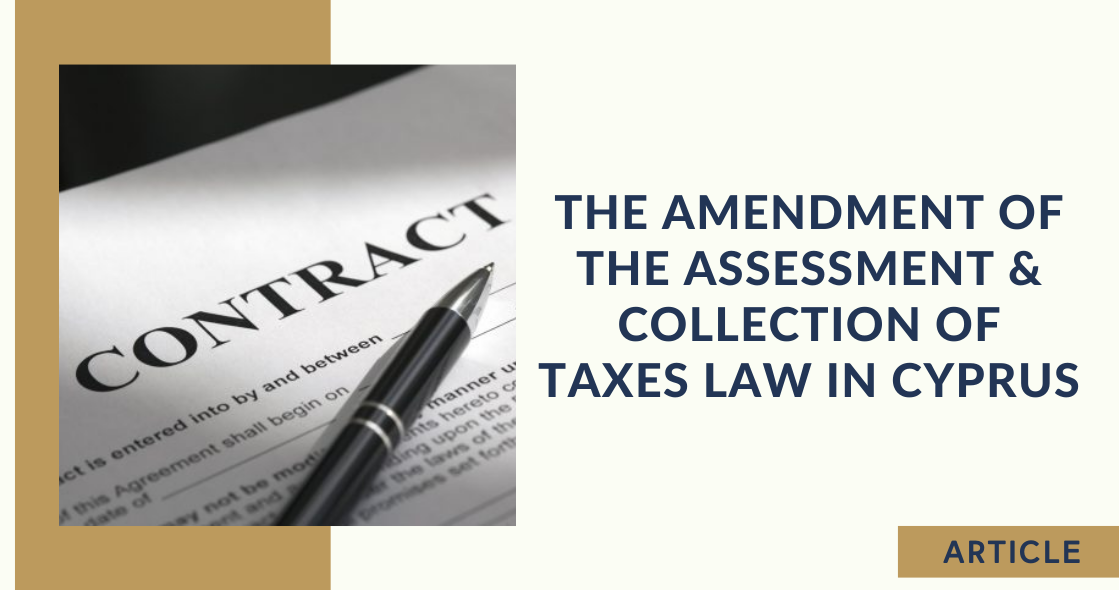 The Amendment of the Assessment & Collection of Taxes Law in Cyprus

The amendments of the Assessment and Collection of Taxes Law 78/2014, made on the 20th of June, 2014 with regards to the Law 4/1978, is a clear demonstration of the Cyprus Government’s commitment to the reforms proposed by the Troika.

Paragraph 3A of the amended Article 49 provides that when a legal entity commits the crime specified in the Article 49 (1) and (2) which refers to fraudulent or wilful submission of tax returns, statements in connection with the entity’s income, or any claims of allowance, deduction of relief, incorrect accounts or information, documentation or other related records and declarations, than the Executive Director, the Members of the Board of Directors and the other Officers whose duties are related to the economic activities of the legal entity, will be considered guilty if it is proved that they fraudulently and intentionally collaborated in the commission of the crime.

In addition to the above, the new Article 51A of the Law states that a person which is proved that has been fraudulently negligent or delay paying the outstanding amount of tax (tax withheld), shall be liable to pay (i) if he is a company, to a fine not exceeding €5,000 and (ii) if he is a physical person, a fine not exceeding €5,000 and/or to imprisonment not exceeding 2 years or both sentences. However, the said section goes further to state that when the person who commits the crime is a legal person, not only the legal person per se is liable for the said conviction but also the Executive Director, the members of the Board of Directors and any other office who has duties related to the economic activities of the legal person are liable to pay (i) with respect of  the tax due up to €1,700, the monetary fine is up to 20% of the tax due and (ii) with respect to the tax due which is above €1,700, in addition to the monetary fine provided in (i) aforesaid, to imprisonment not exceeding 2 years, or both sentences.

For all remaining taxes, such as for example, corporate income tax, an offence will be substantiated only if the omission/neglect is proven to be carried out fraudulently or wilfully.

In case of an objection made by a taxpayer which resulted in an agreement between the Tax Department and the taxpayer or to a decision issued by the Tax Department after an objection, the taxpayer will be provided with a time limit of 3 (three) months, during which the tax due has to be settled. If the time lapses and the taxpayer fails to settle the tax due, the taxpayer will be liable to an offence as herein described, and liability shall be extended upon the Executive Director, members of the Board of Directors and other officers, the duties of whom are related to the economic activities of the legal person as mentioned above.

In addition to this, the Memorandum of Understanding which has been signed by the Republic of Cyprus & Troika included inter alia, the promise to strengthen the powers of the Tax Department so as to ensure payment of outstanding tax obligations, including to authority to garnish assets or prohibiting the alienation or use of assets, including property and bank accounts, by the taxpayer. The garnishing of bank accounts will not require prior court approval but will require approval from the Attorney General and will allow a short appeal period for the taxpayer during which the relevant amount remains frozen.