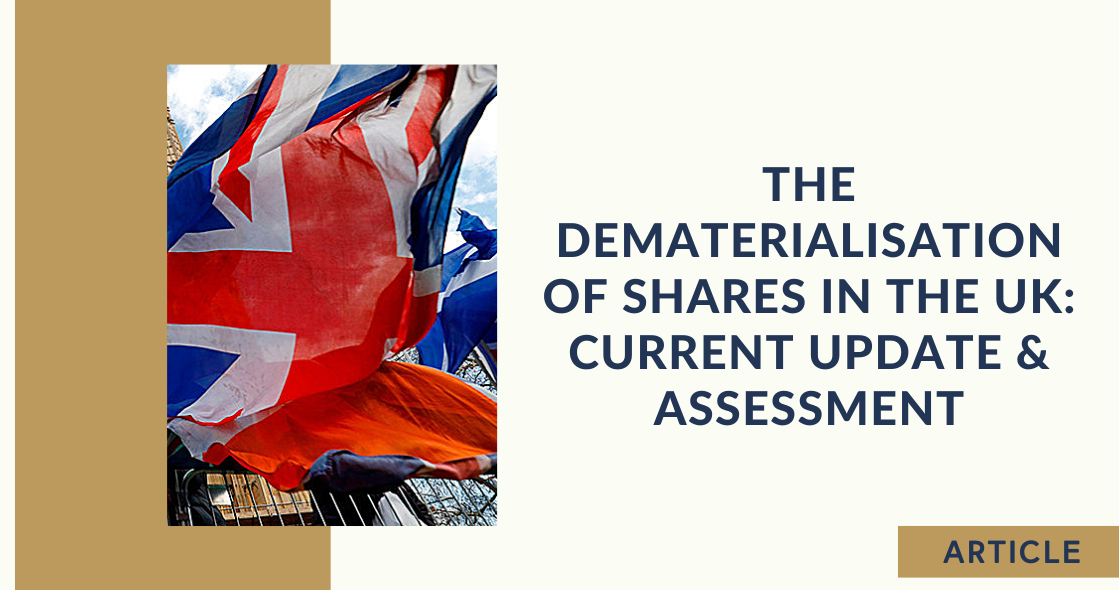 The Dematerialisation of Shares in the UK: Current Update & Assessment

Business is an area that is continuously developing. An integral part of both business and economics are companies. It is possible to say that companies dictate the conditions of the market to a certain extent. Any public or private company has its own shares; a share is a security that provides a portion of ownership of the company and gives the holder the right to a part of the profits.

By purchasing shares of a company, an investor becomes a part owner of the company along with other investors who hold the same stocks and are called Shareholders. Each share is provided by a certificate. The certificate is a paper that is proof that a person has some rights that connect with the specific company. At the moment, computers are used more often to buy shares, so the paper version is rooted in the past. However, for now dematerialisation of shares is not compulsory and an investor can still keep shares in the paper form. Shares are part of the ‘life’ of the company, so dematerialisation has both positive and negative aspects that affect corporate governance. For many years, the issue of dematerialisation of shares and their transfer was subject to discussions.

There are many definitions of shares, some of them are strange and some are very narrow. According to the section 541 of the Companies Act, shares are personal property and can be transferred in an electronic format in accordance with the Act. As the owner of a share, the Shareholder has some rights that are connected with corporate governance.

THE MAIN RIGHTS INCLUDE THAT THE PERSON HAS THE RIGHT TO:

In other words, the fact that a person owns a share of the company, gives them the right to take part in the life of the company. From 1987, it became clear that the stock market of shares in the United Kingdom should be upgraded. So, a new reform was introduced and it was decided that paper shares should begin to exist in electronic format. It means that a process of the dematerialisation of company shares started. The process of dematerialisation in the United Kingdom began in 1996 when the CREST system went live. This means that the settlement depository as such was not present in the UK as it is today. A central depository system in the UK is represented by CREST, and was established by the Bank of England. This system essentially represents a transfer agent, which receives information about all transactions. The legal consolidation of the system and the transition to uncertificated shares is based on the Companies Act and Uncertificated Securities Regulations.

The Uncertificated Securities Regulations creates a statutory mode for dematerialisation of securities settlement system under the UK regulation. The Financial Services and Markets Act imposes certain requirements for securities custodians that are acting on the territory of the UK. Besides these regulations, there exists the Client Asset Sourcebook (CASS). This document contains requirements for financial services concerning the activities that relate to the placement of shares, segregation and registration, recording and holding of client assets. Today, according to the legislation, it determines electronic shares as uncertificated shares and the paper shares as certificated shares.

The last step regarding the dematerialisation of shares was made by the Central Securities Depositories Regulation (CSDR). The main aims of the CSDR are to harmonise aspects of the securities and regulatory framework of the European Union. So, it also intends to improve payments of the securities and regulate settlement system operators that govern the work of the CREST system in the United Kingdom. The CSDR is intended to entirely transfer all the shares in the electronic version by 2020.

At the moment, in the circulation of the UK market, there could exist both types, paper and electronic shares. However, this transition causes great debate in the UK, because there are still many retail shareholders and elderly people that prefer to have their shares in paper format. People that hold lifetime shares in paper format prefer to have face-to-face communication and do not know how to use modern technologies, such as the internet. For these people, the process of dematerialisation of shares can be very painful.

As Sue Concannon mentioned: ‘A couple of years ago, the industry looked at how to move everyone on to electronic share ownership, however it was unpopular with those who have share certificates.’ So now is the right time to make changes to the UK share market, as finally the understanding that the stock market should develop has been applied.

A new process of dematerialisation, in some way, would change the work of the existing CREST system. Now brokers have one nominal account in the CREST system, where all actions of customers are combined. This option is convenient for the broker. However, a new process of dematerialisation provides that each Shareholder will have their own Shareholder Reference Number (SRN), which will directly link with the shareholder and its holding.

Meetings and discussions concerning the introduction of the CSDR developed a set of principles according to which implementation of the act should be made:

Market participants in the UK, such as registrars and issuers, were carried out many consultations regarding changes that must occur. There is a nuance in the United Kingdom, that there are many retail investors, which basically hold their shares in paper form.

This is why a number of issues need to be addressed, such as:

It is difficult to not agree with these. Besides, there are markets that are not covered by the CREST, that still use shares in paper form. This is usually private shareholders.

The process of dematerialisation should take place gradually and with an explanation of all its stages. Otherwise, forced transfer of all issued shares in electronic form without the proper financial and information support of this process differently, it would lead to a significant number of breaches of corporate rights. Compared to other countries, the situation regarding the process of dematerialisation of shares in the United Kingdom looks rather positive. The first attempts to transition to electronic shares happened a few decades ago.

For example, in France in 1985-1986, there was an implemented state program known as Plan Perouse. The French example was followed by Denmark and some other countries. Providing a centralised depository system in these countries resulted in the stimulation of the market, a growing number of investors and investments. However, for example, in Ukraine the situation differs greatly from Western Europe. In Ukraine, there are an extremely large number of shareholders, approximately 13 million, however a stock market, as it should be, is really absent. This is why the process of dematerialisation of shares in Ukraine has been carried out lethargically.

On one hand, the dematerialisation process itself looks simple. It is a process of transferring documentary shares into electronic format. However, on the other hand, this process has many components to it. Today in circulation, there are more dematerialised shares than paper, because work with paper counterparts take more time and expenses. One advantage of the dematerialised shares is that they are much cheaper in their management. The lack of paperwork makes the process cheaper and faster, which also serves as its advantage.

Electronic shares exclude many risks, such as:

Additionally, banks currently prefer dematerialised shares to provide a line of credit on bail. The dematerialisation of the share market is an opportunity and a threat in one face. It can bring benefits to all market participants, and on the other side of this process, it is difficult to take into account the interests of all parties. The main thing is that the process of dematerialisation of the market took place on time. In fact, now in the UK, it is an appropriate time for it. Moreover, there always should be discussions of the process in order that the so-called transition period does not worsen the situation on the stock market. It will allow without serious consequences, moving to a fully electronic and sound system of keeping shares.

Despite the fact that the dematerialisation process should have commenced, the UK government have not announced any specific recommendations. For example, about what type of model of transition will be implemented and whether some intermediaries will be used during the process. These all create problems for investors who act as Company Managers. Therefore, it is important for individuals who hold shares to be able to directly or indirectly continue to interact with the company.

The issue of how the new system of the certificated register will work is still open for negotiation. This is because there are some basic differences among the stock-broker that govern nominee accounts in CREST and the registrars. Looking at the existing and proposed new electronic system, it becomes clear how the current system was not effective in some issues. Adoption of a new electronic system will save millions of pounds for companies per year.

Nevertheless, despite the positive effect that the process of dematerialisation would bring, there are some negative aspects that also should be mentioned, as they have direct impact on both Shareholders and companies. One of the problems is a suitable timeframe. For example, the dematerialisation of shares would apply from 2015, while, the move to the T2 system will take place in 2020. So, there will be some confusion within the market, as the ‘old rules’ will apply for up to five years. There are still discussions on the issue of the deadline of the full dematerialisation (2020 or 2025). Such uncertainty may put potential shareholders at a disadvantage.

One of the main problems of dematerialisation is that the market has not yet formed a sufficient number of experts in this area, which at the appropriate level would carry out any major changes to corporate governance. Inside every company, there should be a person with the ability to deal with the development of internal corporate documents, change the capital structure and deal with the actual dematerialisation process.

Throughout economies of world, the process of dematerialisation of shares becomes more and more popular. Here are some statistics:

If assessing the global percentage, the aspect of dematerialised shares is present in 59% of the market. However, the rejection of documentary forms of equity shares does not mean a complete rejection of the rules governing the circulation of shares. Some of them may apply to the rights that are usually certified by securities.

Consequently, as it could be seen, the process of dematerialisation of shares has rapidly taken off in all countries. It could sound strange, however in some countries there are penalties for refusing to dematerialise shares. So, the government is trying to promote the modernisation of the securities market. Besides, many countries have introduced a provision that from the certain date, issuers do not only have the right, but, also must to issue shares only in electronic format.

Beyond the benefits, which the dematerialisation will bring to the shareholders and companies, it also will have a positive influence to other spheres. First of all, dematerialisation will bring positive effect to economic of the country. Usually, any reforms in the financial market bear only positive changes to the state’s economy. Secondly, it will facilitate the development of the IT sector. Development of new applications and software will help protect the information about shareholders. So, the benefits from the dematerialisation of shares will have the impact to other areas of life.