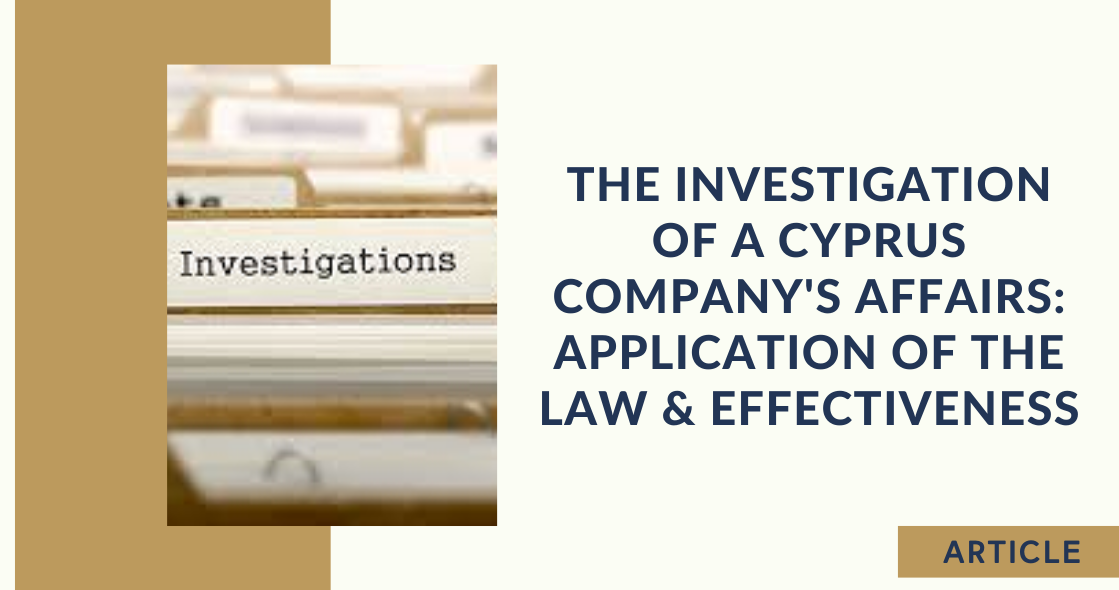 The Investigation of a Cyprus Company's Affairs: Application of the Law & Effectiveness

At the request of a Cyprus company’s Shareholder, where it is proven that a more comprehensive investigation is required regarding a company’s activities, the court can issue a declaration of investigation by an inspector appointed by the Cyprus Council of Ministers. The discretion of the court must be applied carefully; as such an order can heavily impact a company and depending on the outcome of the investigation, can be a severe measure that deviates from fundamental principles of Cyprus company law.

As such, the legislation states that inspectors can be appointed if situations indicate any of the following:

The term company affairs has been interpreted to include any action relating to:

The Cyprus Supreme Court examined a judgement of this kind in a civil case filed by a company questioning the benefit of such company investigations as the outcomes don’t normally constitute a remedy or compensation for obliging parties.

Authorities held that while the purpose of an administrative remedy doesn’t constitute a direct remedy, rather an instrument that can provide useful information to injured parties seeking a remedy. Also adding that the possibility to start investigation proceedings acts as a protection mechanism for minority shareholders in Cyprus companies effectively.

Once the court has issued a relevant order, the appointment of an inspector is compulsory and a recent case involved a family run company between former spouses, in which a wife was a minority shareholder. In such capacity, the wife applied to the court for an order for the investigation of the company’s affairs citing improper and fraudulent conduct by the husband as Director of the company.

The evidence presented by the wife supported by relevant documents convinced the court of first instance there was a need for the investigation of the company’s affairs regarding the conduct of her ex-husband (the court will not act based on suspicion, any application should have a solid and substantial basis.) The evidence supplied alluded to the husbands omission to pay dividends and loans to and from the company by mortgaging its assets without shareholder consent thereby increasing the husband’s personal assets.

In this case, The Supreme Court found there to be no valid or objective reason to intervene and consequently dismissed the appeal, however proceedings of the court of first instance were correctly exercised and the discretionary power for the appointment of an inspector by the Council of Ministers was also correct.