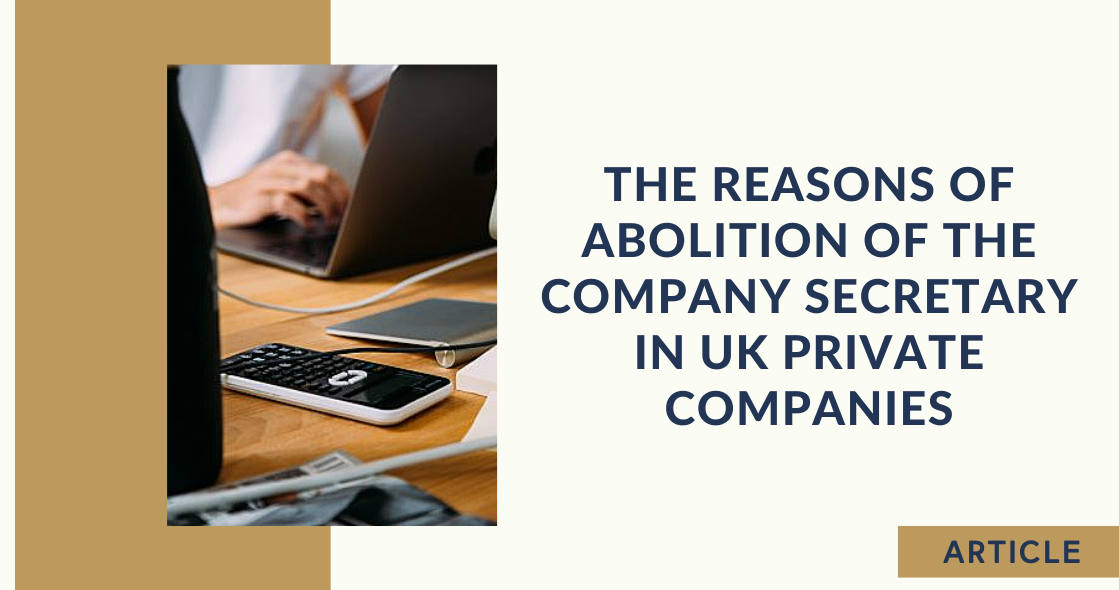 Company Secretary is typically named a Corporate Secretary or just a Secretary. The Company Secretary is responsible for the efficient administration of a company, particularly with regards to ensuring compliance with statutory and regulatory requirements and also for ensuring that decisions of the board of directors are implemented.

The corporate governance framework in the UK is established by the FRC’s UK Corporate Governance Code.

Usually, the company secretary has a duty to advise the Board, through the Chairman on all governance matters. They periodically review whether the Board and the company’s other governance processes are fit for purpose, and may consider any improvements or initiatives that could strengthen the governance of their company.

This allows smaller companies able to benefit from the option as to whether they wish someone to hold the Company Secretary title. However, if a private company decides to dispense the requirement for a Company Secretary, it will need to ensure that the functions of the role are carried out by another individual or individuals; typically, the Directors.

DISADVANTAGES TO EMPLOYING A COMPANY SECRETARY

Two main reasons justify why it may be advantageous to structure a company without a Company Secretary. The first follows closely with UK Company Law recognising sole proprietary companies and now recognising that it may be pointless to prevent one Director from acting as Company Secretary as well, only for judicial or technical reasons.

In fact, considering the duties of a Company Secretary, it is clear that it can be fulfilled by the Director himself as part of his directorial and executive functions. Actually, if we analyse the duties, we can see than the main role of the Company Secretary is to assist the Director in daily company tasks. He is also a counselor when procedures are required to be followed by the company become too complex which seldom happens in the case of smaller companies, particularly regarding sole proprietary companies.

ADVANTAGES TO EMPLOYING A COMPANY SECRETARY

The Cadbury Report (1993) clearly sums up the importance of the role by stating:

The second reason that justifies the abolition of Company Secretary in private companies regards the limiting of personal liability, as it means one less person is exposed to the personal responsibility that can be imposed on officers of the company.

Once again, by comparing the liability of a Company Secretary for a breach of their duties with the one of a Company Director, it becomes clear that the first could be considered as being only a part of the second one. In fact, the Companies Act underlines that a secretary who commits a breach of his duties shall be liable to the company for any profit made by him or for any damage suffered by the company as a result of the breach; a Secretary who is guilty of an offence under the Companies Act shall be liable on conviction to, a fine, imprisonment, or a default penalty under the respective provisions. Moreover, “The Company Secretary should be responsible for advising the board through the chairman on all governance matters.”

However, on the governments website, explaining to individuals concerned how to ‘set up a private limited company’, stresses that ‘Even if you have a Company Secretary, the Directors remain legally responsible for the company’.

The Director of a company who also acts as the Secretary should recall that, given the differing nature and scope of duties of the respective posts, must act in respect of the duties that are relevant to each task, always remembering whether he is carrying this out as Director or Secretary. For example, ‘where an act is required to be done by a Director and the secretary, it is not possible for one person to sign in his respective capacities as Director and Secretary.

To conclude, it could be said that Company Secretary for private companies has been abolished because it was useless and could even obstruct the proper operation of the company. This is deeply illustrated by the fact that the functions and liability of the Company Secretary only represent a part of those of the Director.

Furthermore, the origin of his authority to act alone on behalf of the company confirms this situation. In fact the main condition for him to do so is to obtain an agreement from the directors of the company. Even if an express consent is not needed for him to practice his usual and administrative functions, this is only true for the tasks included within the scope of his administrative role.

As UK lawyers said; so long as the Secretary acts within the scope of his authority (whether actual, implied or ostensible), his actions will bind the company.

However, if a Company Secretary acts outside the scope of his authority, not only may he may find himself liable to the company for breach of his authority but worse still, he could potentially be personally liable to a third party for any contract entered into, unless the Directors choose to subsequently ratify the secretary’s action. It is therefore important for a Company Secretary in any given situation to ask himself whether he has authority to undertake a particular act and, if in any doubt, he should seek the consent of the board of directors.