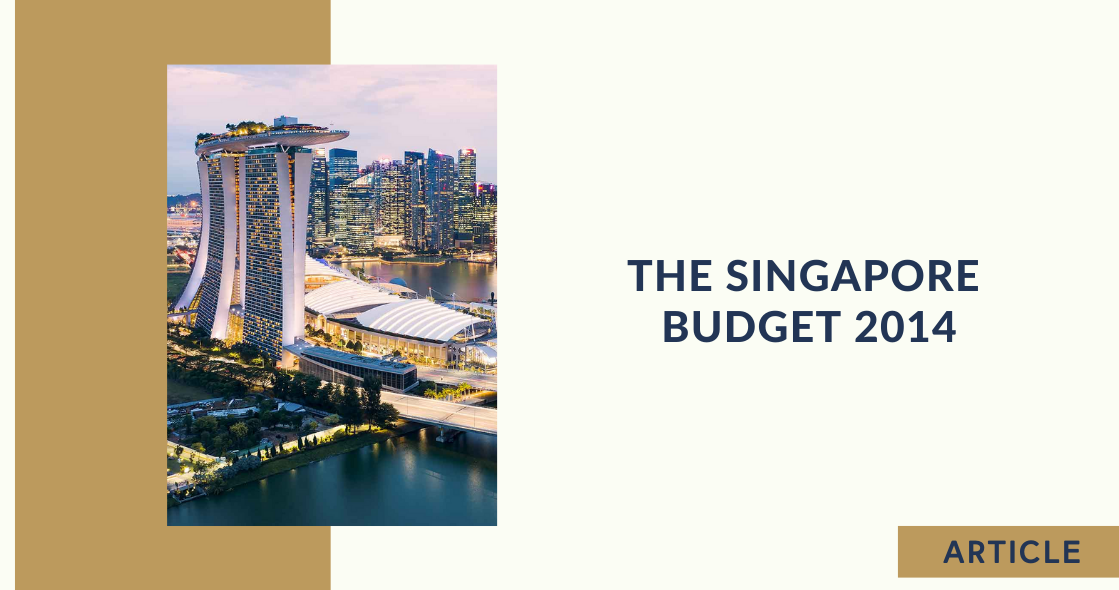 This year’s budget did not emphasise on significant tax changes. The government wants to restructure the Singapore economy to achieve quality growth. Businesses that make investments in productivity to save manpower or achieve innovative breakthroughs will be actively supported by the government.
Businesses had called for greater support from the government as businesses continue to face a challenging operating environment with rising business cost and a tight labour market. With the Singapore Budget 2014, the government is hoping to achieve a fair & equitable society.

The Productivity and Innovation Credit Scheme was due to expire in the Year of Assessment (YA 2015). This has been extended for another three years till YA 2018. The PIC scheme allows businesses a deduction of 400% (capped at $400,000) of their qualifying expenditure incurred per YA against their taxable income. The qualifying expenditures span from six broad categories of investments such as training, R&D expenditure or investment in automation equipment.
To encourage businesses to spend more on productivity and innovation improvement the government extended the PIC Scheme for another three years. The fact that there is a gradual increase among SMEs also encourages the government to extend the scheme for a longer period.

The government took a more measured approach by extending the R&D tax incentive for a further 10 years to 2025. To encourage private R&D, the government extended the 50% additional tax deduction administered by the EDD for another five years till 31 March 2020.

SMEs will be more willing and encouraged to take up loans/funding from banks due to the increased Government risk-share in the Micro-Loan Programme (MLP) from 50%-70%. This programme was introduced in 2001 and supports SMEs with less than 10 employees and $1m turnover. The government, under this programme, shares with SMEs the risk for bank loans below $100,000 to encourage banks to lend to small and budding businesses.

Companies must have employed at least three local employees and contribute CPF on their payroll in the last month of the quarter or combined consecutive quarters which relates to the cash payout option.
With effect from YA 2016, the government has made a condition that the companies will have to meet the above condition for a consecutive period of at least three months prior to claiming the cash payout.

From YA 2011 to 2014, companies could defer their tax for the current YA with the PIC qualifying expenditure incurred capped @ $100,000.
With effect from YA 2015, the tax deferral option will lapse as the PIC cash payout carries out the same function of assisting companies relieve cash flow concerns.

The government extended the Section 19B Writing Down Allowance for costs incurred to acquire qualifying Intellectual Property Rights for another 5 years until 2020. The government wants to promote Singapore as an IP hub through this measure.
The accelerated WDA Scheme allows Media and Digital Entertainment (“MDE”) companies to accelerate writing down period from five years to two years, subject to EDB’s approval.

Companies are encouraged by the government to safeguard their intellectual property.
The 100% tax deduction will be extended for five years till YA 2020. Businesses can also continue to claim until YA 2018 a further 300% deduction on up to S$400,000 of such qualifying costs under the PIC scheme.

The LIA Scheme is open to companies in the manufacturing sector and now extended to businesses in the logistics sectors and carrying out qualifying activities on airport and port land. The government wants to continue encouraging businesses to optimise land use.
Conditions to be met to qualify for LIA Scheme:

The scheme will be extended for five years till 30 June 2020. The enhancements are effective for LIA approvals granted and capital expenditure incurred on or after 22 February 2014.

A new type of capital instruments under the Basel III global capital standards are the additional Tier 1 instruments. Singapore incorporated banks are required to meet minimum capital adequacy ratios that are 2% higher than the Basel III requirements with affect from 1 January 2015 and also meet the requirements from 1 January 2013 two years ahead of the Banking Supervision’s 2015 timeline.
The government wants to provide tax certainty and thus, such instruments other than shares, will be treated as debt for tax purposes. Distribution on such instruments will be:

The above is subject to existing rules.
This tax treatment will apply to distributors accrued in the basis period for YA 2015 and thereafter.

RECOVERY OF GST FOR QUALIFYING FUNDS

Qualifying funds that are managed by prescribed fund managers in Singapore are allowed to claim GST incurred on expenses at a fixed rate.
This concession will be extended for five years till 31 March 2019.
The Monetary Authority of Singapore (MAS) will release further details of the change by end March 2014.

The scheme was introduced on 10 September 2004 to encourage investments in aircraft rotables that would increase the productive capacity of the aerospace maintenance, repair & overhaul companies.
As the scheme is assessed to be no longer relevant, it will be allowed to lapse after 31 March 2015.

Other existing conditions of the schemes remain unchanged.

Specified income derived by a DUT is taxed upon distribution in the hands of certain investors. Qualifying foreign investors and individual (Unless such income is derived through a partnership in Singapore or is derived from the carrying on of a trade, business or profession) are exempted from tax on any distribution made by a DUT. The following changes will be made in order to streamline and rationalise the DUT Scheme.

Other conditions remain unchanged. A review date of 31 March 2019 will be legislated to ensure that the relevance of the scheme is periodically reviewed. The MAS will release further details of the changes by the end of May 2014.

Under the ABP Scheme, land under development can be granted property tax exemption for a period of up to three years, subject to conditions:

If the project cost less than $500 million, the Minister for Finance must be satisfied that the project will create substantial benefits for Singapore.
A review date of 31 March 2017 will be legislated to ensure that the relevance of the scheme is periodically reviewed.

The Betting and Sweepstakes Duties Act imposes duty on betting activities.
The current rate on Totalisator or Pari-Mutuel Betting (excluding Horse Racing) and other Systems or Methods of Cash or Credit betting is 25% of gross bets (net of GST).
With effect from 1 July 2014, the duty rate for the abovementioned activities will be increased to 30% of gross bets (net of GST).

New excise on cigarettes and other manufactured tobacco products will be increased by 10% to $388 per kilogram. The increase took effect from 21 February 2014.

Buyer’s stamp is charged as a specified amount for every $100 or part thereof of the consideration for land premiums and purchase of property.

Purchase Price or Market Value
(Whichever is higher)RatesEvery $100 or part thereof of the first $180,000

Stamp Duty on a Lease of an Immovable Property

The stamp duty payable is assessed on the annualised rental amount, regardless of the actual lease period. This was computed by applying the following rates to the average annual rent (AAR) amount.

Exemption is granted where the AAR does not exceed $1,000.

With effect from 22 February 2014, the stamp duty rates on leases were revised as follows:

Stamp duty is payable on the instruments relating to the transfer of shares.

With effect from 22 February 2014, the share transfer duty rate was revised to 0.2% of the higher of the purchase price or market value of shares transferred, subject to a minimum duty of $1.

Stamp duty is charged as a specific amount for every $1,000 or part thereof.

Amount of facilities granted or transferred

MortgageEvery $1,000 or part thereof of the amount of facilities granted.

Variation to MortgageFor every $1,000 of the amount transferred, assigned or disposed, inclusive of interest which is in arrears.

Transfer, assignment or disposition of any mortgage or debenture

With effect from the 22nd of February 2014, the mortgage duty rates were revised as follows:

Amount of facilities granted or transferred

MortgageBased on the amount of facilities granted on the mortgage.

Variation to MortgageBased on the amount transferred, assigned or disposed, inclusive of interest which is in arrears.

Transfer, assignment or disposition of any mortgage or debenture

The CEVs is scheduled for a review in end 2014.
The GVR Scheme for commercial vehicles, buses and motorcycles was extended by 2 years till December 2014.
In respect of CEVs & GVR, it is proposed to: