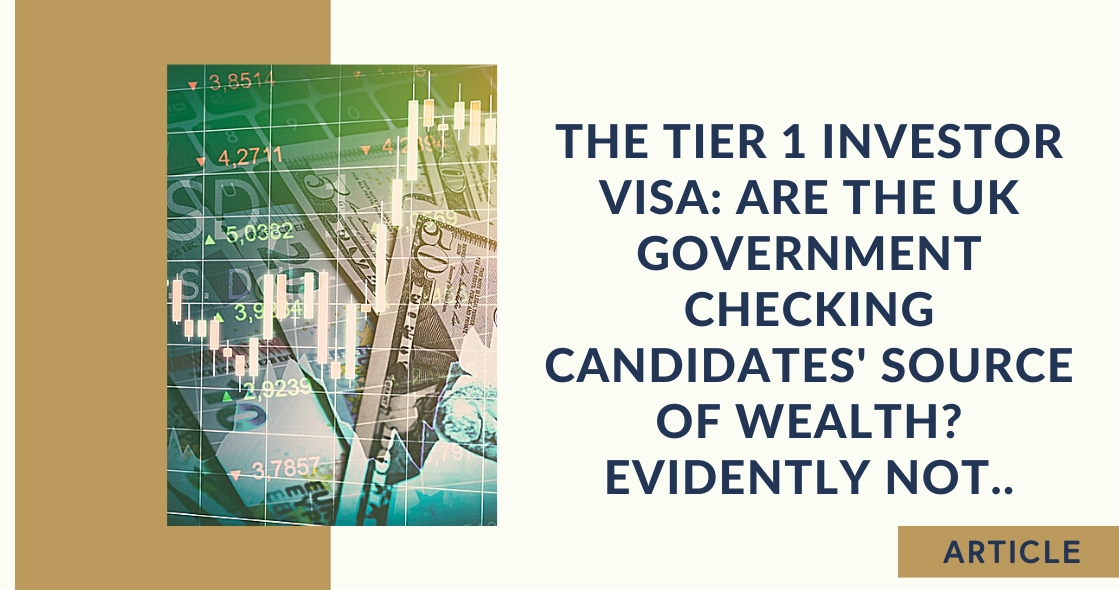 The TIER 1 Investor Visa: Are the Uk Government Checking Candidates' Source of Wealth? Evidently Not..

One of many legal disputes resulting from the recent infamous Kazakhstan BTA bank fraud case has shed new light on a little-known immigration scheme colloquially known as the golden visa scheme and officially called a Tier 1 Investor visa in the UK; the scheme grants investors residency in exchange for spending £2m in UK bonds or shares through a bank, with applicants eligible for to remain indefinitely, with full citizenship after five years.

Controversially, those offering £5 million can settle after three years, and those with £10 million after only two years. This was used by the wealthy Ablyazov family at the centre of the scandal which also involved billions of dollars reportedly robbed from a bank in Kazakhstan. The case involved hundreds of international and offshore firms who had their assets frozen in an attempt to recover the funds.

As the terms of the Tier 1 Investor visa allow for the original investment to be returned to the candidate along with any interest accrued, the UK government actually makes a loss on each visa. However enthusiasts of the scheme claim that as well as an investment in gold (essentially a loan to the government) the country attracts affluent businesspeople that will go on to inject large sums into the economy in the form of goods, wages and taxes.

Who else offer Golden Visa Schemes?

Other EU countries that offer similar schemes are Cyprus, Malta and Portugal, all with varying terms however that essentially offer residency, citizenship or passports in exchange for economic investment.

Currently, Portugal offers European citizenship for the most economic deal at only half a million euros that can be used towards real estate which gives the applicant residency, however most candidates don’t live there, most invest and lease the property as a form of income and security.

For some, it may come as a surprise to learn that citizenship or residency can fundamentally be purchased however the notion isn’t a new one and dates back to the 80s; first being established by the petite islands of St Kitts & Nevis in 1984 to inject some new cash into the economy.

Commentary on the Golden Visa Schemes

“This is an area where consecutive governments have allowed wealth individuals to queue jump. It’s the sort of thing that tax havens do to encourage inward investment. We have effectively been selling UK citizenship to the rich from often non-democratic countries who one would not generally regard as desirable immigrants.”

“The problem with these kinds of schemes and the UK scheme in particular, are that they’re letting people into Europe without sufficient security checks due to applicants’ names remaining worryingly anonymous.”

Anonymous, until last year when one of the dozens of Ablyazov fraud cases surfaced,  which was around the same time that BTA Bank, which he had managed since the 2000s, were being investigated by regulators, who had found that out of the banks payments, almost 20% totaled NPLs (non-performing loans). Not surprisingly; BTA later declared it could not meet its liabilities. Mr Ablyazov was removed as chairman and The Kazakh sovereign wealth fund took.

It was later found that Mr Ablyazov had perpetrated a huge and systematic fraud against the bank, predominantly by lending or otherwise transfering billions of dollars to tax havens in offshore companies with no assets and which appeared to be in the control of Mr Ablyazov himself.

As of December last year, BTA had been awarded damages totaling just short of $5 billion, which they are still trying to recover from Mr Ablyazov who reportedly fled to Switzerland where he waited until 2014 when his investment in the UK matured where he now has indefinite leave to remain in the UK.

It is unclear what, if any, due diligence checks the Home Office carried out on the Ablyazov family and their investment sources.

The Home Office in the UK has effectively admitted to never having fully investigated the 3,000 golden visa applicants and their source of riches to identify how many of them are Politically Exposed Persons or PEPs (foreign officials that could potentially be considered high risk for corruption). With each having invested at least £1 million into the UK economy; with up to potentially £3 billion having entered the scheme to finance the UK government, again with no examinations on the source of wealth.