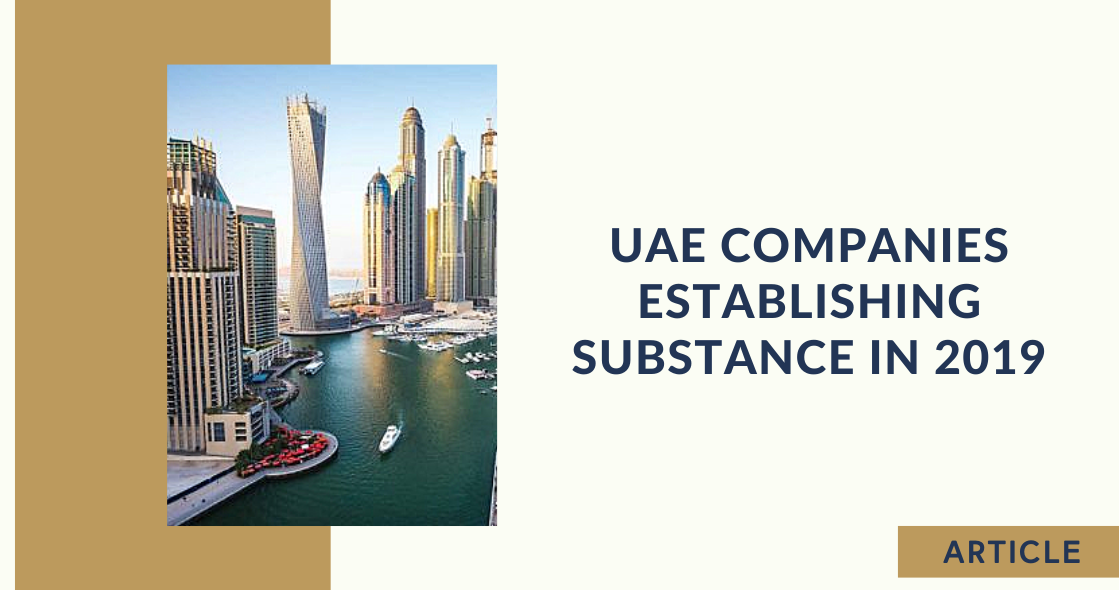 The UAE recently released their own version of CFC legislation: The Cabinet of Ministers Resolution n.31/2019 which came into effect in April earlier this year, in order to better regulate Economic Substance (ES) in the United Arab Emirates.

Last May, we reported about how the UAE were collaborating with the OECD Inclusive Framework on BEPS; and had agreed to align its tax policies with the Base Erosion and Profit Shifting (BEPS) Directives of the OECD.

With the new economic substance regulations, it is expected that the United Arab Emirates should be removed from the European Union (EU) blacklist of tax havens along with other jurisdictions going through similar procedural changes to their constitutions including Mauritius and BVI.

The main goal behind the new regulations is to introduce certain requirements for companies and other entities to demonstrate and exhibit legitimate economic activity happening in the UAE.

THERE ARE 3 AVAILABLE TESTS UAE COMPANIES CAN USE TO ESTABLISH ECONOMIC SUBSTANCE:

Using this option, the company or entity would have to be directed and managed or run in the UAE as per relevant activity. For example, regular board meetings, certain quorum of directors should be physically present, the minutes of all the board meetings should be kept within the jurisdiction.

Using this option, the company or entity which is performing any of the specified relevant activities for the purpose of the ES regulations would require to prove that the relevant CIGA’s have been undertaken in the UAE.

The pre-conditions for the CIGA Test differ depending on the relevant activity that is in question. These are listed in a separate article here as per the UAE legislation and what is expected as core income generating activities performed in the UAE to be conforming with the ES regulations.

Using this option, the company or entity would be required to hire an adequate number of qualified employees in the UAE and then incur adequate or sufficient expenditure inside the jurisdiction. Besides that, they must have an adequate physical presence in the UAE.

The applicability of the ‘Adequate’ test would depend on the particular facts and usually vary case to case. The UAE regulations expect that a directive would be issued to elucidate any expression or concept that is covered by the law, which includes the meaning of the term ‘adequate’.

LIMITATIONS TO THE NEW ES REGULATIONS

The legislation anticipates additional annual statement to be given to the Regulatory Authority notifying whether the UAE entity has stopped carrying on a relevant activity, if their gross income related to a specific relevant activity is being taxed in some other jurisdiction and what the date of the financial year ending is. The new ES regulations have yet to provide further guidance on the process, templates and pre-requisites for the reports and notifications, which are likely to be included in the directive that will be issued in due course.

NON-COMPLIANCE WITH ANY OF THE ES TESTS

In case of any non-compliance of the ES Test, the UAE law anticipates penalties going up to AED $50,000. In case the UAE entity is not able to comply with the ES regulations in a following financial year, then the penalties could be imposed for up to AED $300,000 including other administrative actions like the suspension, barring or non-renewal of the entity’s trade license.

Furthermore, assuming that there would be a greater amount of information being exchanged between tax authorities, and in case the economic substance or ES is not met, then there is a chance of extra tax-related implications like non-deductibility of expenditures in some specific jurisdictions for global parties and bigger scrutiny on all the cross-border transactions.