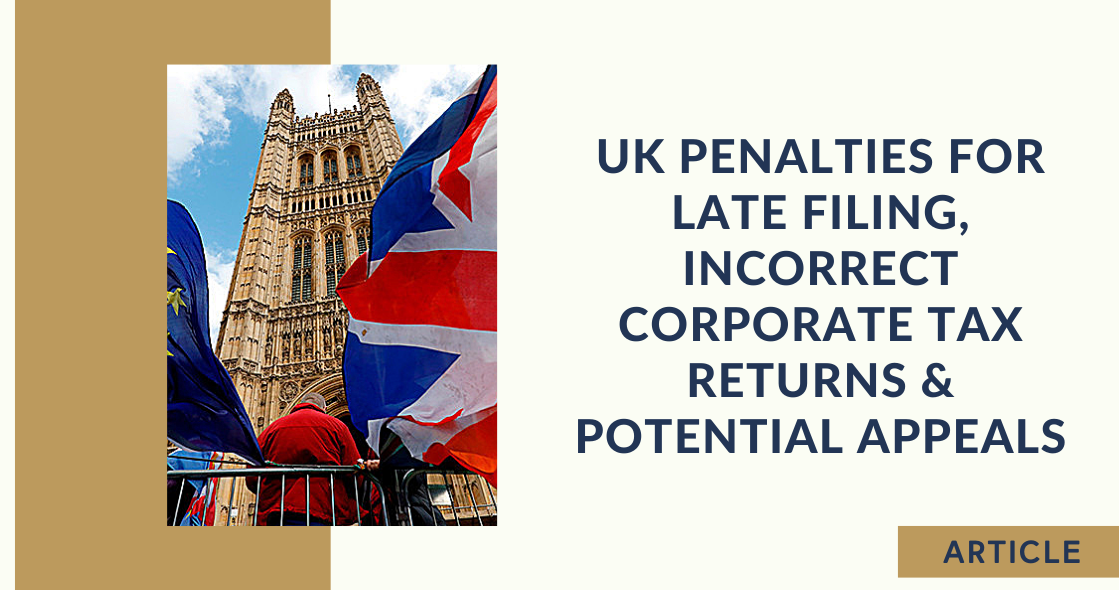 Applicable UK filing legislation is generally speaking quite relaxed for negligent filings and also when all company officers are honest about previous misfiling’s. If any company officers make a statement you know to be false, the HMRC can conduct a criminal investigation leading to prosecution in court on behalf of your company.

The HMRC charge statutory interest on any tax paid late and may also charge a penalty for:

The HMRC calculate penalties in accordance with provisions contained in legislation. These can be reduced for positive behaviour.

Calculating the amount of the potential lost revenue (PLR)

The penalty for any of the above is calculated using a percentage of what is known as ‘potential lost revenue’. PLR is the amount that arises from correcting an error in a return or financial statement, an incorrect repayment or an inaccurate claim.

DETERMINING THE HMRC’S VIEW OF THE INCORRECT FILINGS

Whenever an inaccuracy has been filed, the authorities in the UK tend to try to work with companies to find out what caused it. HMRC refer to this as the ‘behaviour’. The type of behaviour will affect whether or not a penalty is charged, and the amount of the penalty as a percentage (see table below).

THERE ARE 4 DIFFERENT TYPES OF BEHAVIOUR

Everyone has a responsibility to take reasonable care over their corporate filings. What ‘reasonable care’ is will depend on each companies’ abilities and circumstances.

If you took reasonable care to get things right but your return or financial statement still contained an inaccuracy, HMRC will not charge you a penalty.

This is where it shows that the company officers failed to take reasonable care to file the annual returns correctly.

This is where company officers knew that a return or financial statement was inaccurate when it was filed with the HMRC. Examples of deliberate inaccuracies include:

This is where company officers knew that a return or financial statement was inaccurate and took active steps to hide the inaccuracy from the authorities, either before or after sending it. An example of taking active steps to conceal an inaccuracy is where you deliberately file a zero balanced accounting sheet omitting transactions that occurred during such period.

Deciding whether the disclosure was unprompted or prompted- This determines the minimum penalty percentage that can be charged.

DECIDING THE RANGE THAT THE PENALTY FALLS WITHIN

The penalty percentage falls into one of 6 ranges. The range it falls into depends on the type of behaviour and whether it was a ‘prompted’ or ‘unprompted’ disclosure.

A company officer may have to pay some or all of the company’s penalty if the penalty is due to their actions, and one or more of the following applies:

IF A COMPANY HAS DELIBERATELY DONE SOMETHING WRONG

The HMRC may carry out a criminal investigation with a view to prosecution if any company is found to have deliberately done something wrong, such as:

If a company has deliberately got its tax affairs wrong, and this is found during the check, the company’s tax affairs and filings will be more closely monitored. HMRC have an enhanced monitoring programme called ‘managing serious defaulters’.

The HMRC may charge companies penalties if they are sending a return or other financial statement that contains an inaccuracy, and the inaccuracy:

If you ask someone else, such as an adviser or intermediary to do something on your behalf, you must do as much as you can to make sure that an inaccuracy does not occur.

If you don’t give HMRC accurate details, in full, they can take you to court and you may get a fine or lose the company license.

POTENTIAL APPEALS FOR LATE FILING OR OTHER PENALTIES

Explaining any of the below appeals may create a case in your companies favour. However please note that none of the below categories are intended to create an indefinite exemption from the consequences of late filing or any legitimate company penalties. Each case for appeal will be considered by an individual case manager who may not apply a standardised approach.