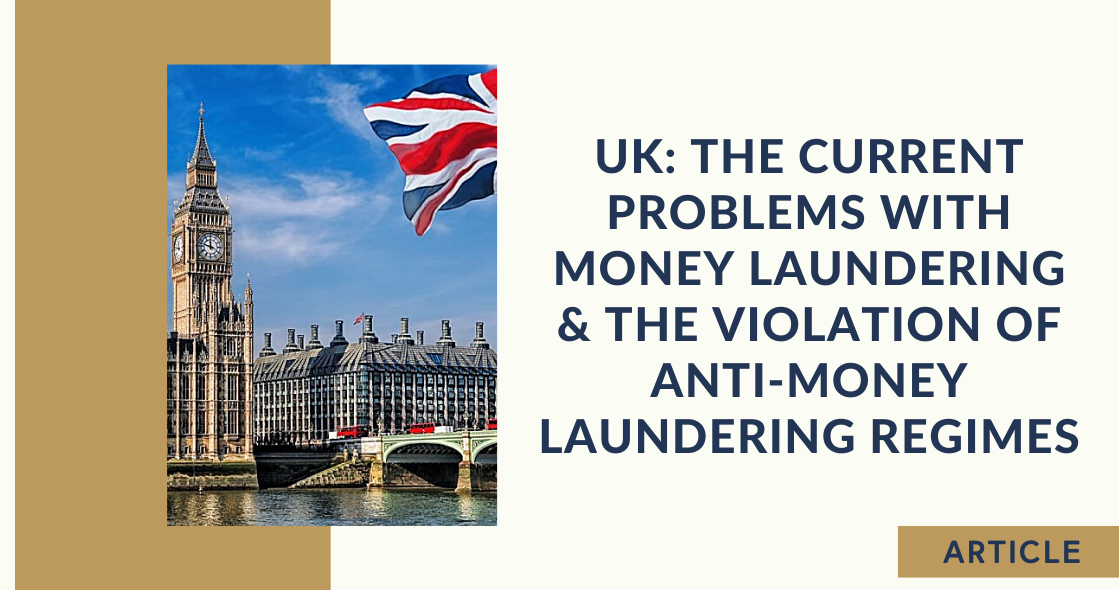 The fact that money can be transferred from one jurisdiction to another means, that money laundering as a concept involves the entire modern world. Money laundering is a process during which the origin and purpose of payments are hidden and typically has three stages.

The first stage is ‘placement’ when the ‘dirty’ money becomes available on the bank account. The second stage, when money begins to move is called ‘layering’. At this phase, money starts to transfer from one account to another, in order to hide its initial origin. The final stage is ‘integration’ when the ‘dirty’ money is integrated into the financial system and legally can be used for any purpose. Without the banks’ role in this scheme, money laundering would be probably impossible or much more complicated.

In the United Kingdom, banks are always under the supervision of strict regulatory bodies. In this case, the words of the Director of Enforcement and Financial Crime at the FCA, Tracey McDermott, would be appropriate. She said: “Banks are in the front line in the fight against money laundering. If they accept business from high-risk customers they must have effective systems, controls, and practices in place to manage that risk.” That is why the government monitors the activities of banks and severely punishes them for violations of the anti-money laundering regime.

A prime example is a situation with the private bank Coutts, where the Queen Elizabeth II keeps her money. The bank was fined for £8.75 million GDP because it failed to ensure proper control over the transactions of its customers and could theoretically have complicity in money laundering. The Financial Services Authority stated that Coutts carelessly dealt with the collection of information on suspicious, even high-ranking depositors, ignoring the disturbing facts and did not update their database on time. Also, the bank did not track the bank’s transactions on its accounts. These violations were significant, widespread and unacceptable. The FSA claims related to the activity of Coutts in 2007 – 2010. These violations were identified during the investigation, which involved four other British banks.

Besides, the problem of money laundering in British banks arises not only in the UK but also abroad. For instance, British bank Standard Chartered accused by the US financial regulators for conducting illegal transactions with Iranian companies. The Department of Financial Services in New York announced that the British bank Standard Chartered suspected of deliberate falsification of statements to conceal transactions with Iranian counterparts that were subject to economic sanctions imposed by the USA. Through the American branch of the bank in 2001, there were about 60 thousand transactions totaling $250 billion, which brought to Standard Chartered into a profit of ‘hundreds of millions of dollars’.

Another example is the situation with HSBC in the US. HSBC was fined $1.9 billion, because it was involved in the money laundering of funds of Mexican drug cartels, servicing of suspicious customers from the Middle East, international terrorists, and countries that the US considers ‘rogues’ of the international community. The published report of the US Senate Subcommittee on Investigations stated that during 2006 – 2010 years, the UK branch of HSBC made suspicious transactions totaling the amount of $15 billion for customers from Mexico, Iran, Syria, the Cayman Islands and the Russian Federation.

However, the weakness, in a certain ratio of the banking system is the result of a breach of internal controls and measures that a bank should have in place to avoid money laundering. That is why the Financial Conduct Authority (before these functions were held by the Financial Service Authority) has the power to fine banks for failures in their anti-money laundering controls. Two striking examples of these activities are listed below.

Not so long time ago, the FSA fined EGP Private Bank for failures in its anti-money laundering controls for high-risk clients. For more than three years, such serious failings lasted.  During the inspection by the Financial Service Authority, it was found that EGP Private had not fully performed its anti-money laundering policies into legitimate practice. It was found that in 13 cases, the bank had dealt with clients that had been charged with criminal offenses including money laundering and corruption. More than 83 facts were reviewed by the FSA and found to raise serious concerns. There were situations when the bank could not explain how it agreed to make transactions with the high-risk customers. On the paper their anti-money laundering policies looked good; however, in practice the implementation was poor.

A similar situation occurred with Standard Bank, which was also fined in the US. It was fined by the Financial Conduct Authority for serious weakness in its anti-money laundering controls. It is the case whereby a new penalty regime had been used. During the investigation, the FCA reviewed 48 corporate customer files and was found that the bank failed to carry out adequate EDD measures before establishing relationships with certain customers and irresponsibly dealt with the monitoring of business relationships and customer due diligence (CDD). As a result, serious weaknesses in the internal security system of the Standard Bank were discovered and the defection to comply with anti-money laundering regulations took place between December 2007 and July 2011.

In 2012, the FSA imposed a financial penalty of £525,000 to Habib Bank AG Zurich because it failed to provide reasonable care to establish and maintain adequate anti-money laundering systems and controls. In 2013 the FCA fined Guaranty Trust Bank (UK) Ltd £525,000 for failures against money laundering controls.

According to the Financial Service Authority Review which took place in 2011, it was found that some banks have good and effective anti-money laundering controls, however, at the same time; particularly small banks have inadequate internal controls and measures. Not all banks deal with ‘high-risk customers’ or politically exposed persons (PEPs). Despite the changes in the legal framework, a number of deficiencies identified during the review were the same as or, similar to those which were set out in the FSA report in March 2001. At that time, banks in the UK were treated with accounts that were associated with a former Nigerian military leader, General Sani Abacha. The Financial Service Authority worried that banks did not learn from their mistakes and did not use the time to improve their internal anti-money laundering systems. Besides, serious shortcomings have been identified in systems and control of banks, and signs that some banks have the will to deal with high-risk business relationships without proper control when there is potential to gain more profit. It means that some banks are handling the proceeds of corruption or other financial crimes.

In 2013, the Financial Conduct Authority held a conference on financial crimes to emphasize once again the problem of money laundering through banks. According to the results, the FCA team handed out a record £321 million in fines during the last financial year, more than triple the previous high of £89 million. On the one hand, this suggests that banks are seriously violating the anti-money laundering regime in the United Kingdom. While on the other hand, the supervisory authorities of the banking market are looking for every misstep of the banks and abetting in money laundering.