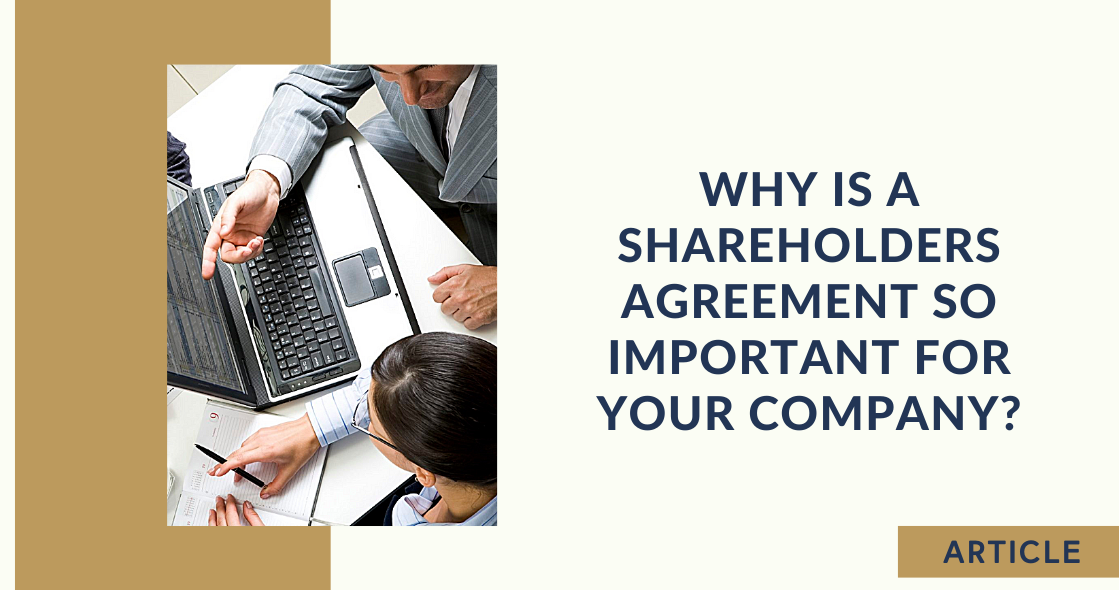 Why is a shareholders agreement so important for your company?

A Shareholders Agreement is essentially a legally binding contract established and agreed between the founding Shareholders of a company. It can arise in a number of circumstances, but typically they are used to manage issues appropriately and rules regarding the transferal of shares in a Private Limited Company, or in a joint start-up to regulate the relationship between the founding members.

Generally speaking there is no legal requirement for a business to have one, it is however advisable to consider creating a shareholder agreement if there are two or more founding investors in the business, to ensure all party’s rights and investments are sufficiently protected.

Establishing a Shareholder Agreement will effectively set out the organisations fundamental running’s, some examples include how decisions are agreed upon and implemented; how shares can be sold or transferred. It guarantees that founding member roles are clear on the company’s main principles, and in agreement that all obligations are assigned fairly.

The Shareholder’s Agreement in actuality will be used to safeguard everyone’s rights and responsibilities in a fair way. By evaluating the potential issues or disagreements that could arise, reduces possibility of contention between parties and allows the business to grow from a solid foundation.

A typical Shareholder Agreement will contain clauses such as member protection; exit strategy provisions for members who wish to sell their shares or leave the company. Bad leaver provisions include clauses that force the leaving Shareholder to sell their shares at a relatively low value if they are leaving on bad terms, for example without fulfilling their obligatory duties. The Agreement can also specify who is in charge of important decisions, and what protection minority shareholders will receive.

For small to medium accountancies, another important aspect to consider is whether a clause should be included regarding the circumstances in which to repurchase member shares, in the event of a death, or sudden departure. It is recommended to consider including restrictive covenants to prevent departing shareholders from competing with the business once they leave.  Investing Shareholders will need to consider the risks that may arise in the daily running of the company and consider creating clauses for the protection of other shareholders.

Having a well thought out, precise Shareholder’s Agreement may prevent the significant costs of a legal battle, should the relationship between shareholders become strained. Therefore, it is worth drafting a legitimate Shareholder’s Agreement if your business has, or plans to have more than one member and you require any terms and agreements to be legally binding.

Any agreement should be reviewed throughout the financial year, particularly in situations such as the departure of a Shareholder or new shareholders joining the company. Holding a review will ensure all any protection sought is sufficiently drafted for both parties and that they fulfil the needs of any existing or new members.

In conclusion, putting a Shareholders’ Agreement t in place is an opportunity to include certain clauses such as pre-emptive actions, roles and responsibilities, dividend rights or departure provisions in case of Shareholder disagreements, things that shouldn’t be included in the articles of association. They should be planned constructively and accurately drafted.

Contact us with any queries you have, we’d be happy to assist. Alternatively, you can read more about our Family Office Wealth Management service here.

*This article is only a guide and should not be used without seeking professional legal advice. If you are unsure whether it is appropriate for your business to create a Shareholder Agreement, Eltoma Corporate Services has trained Legal Advisors.