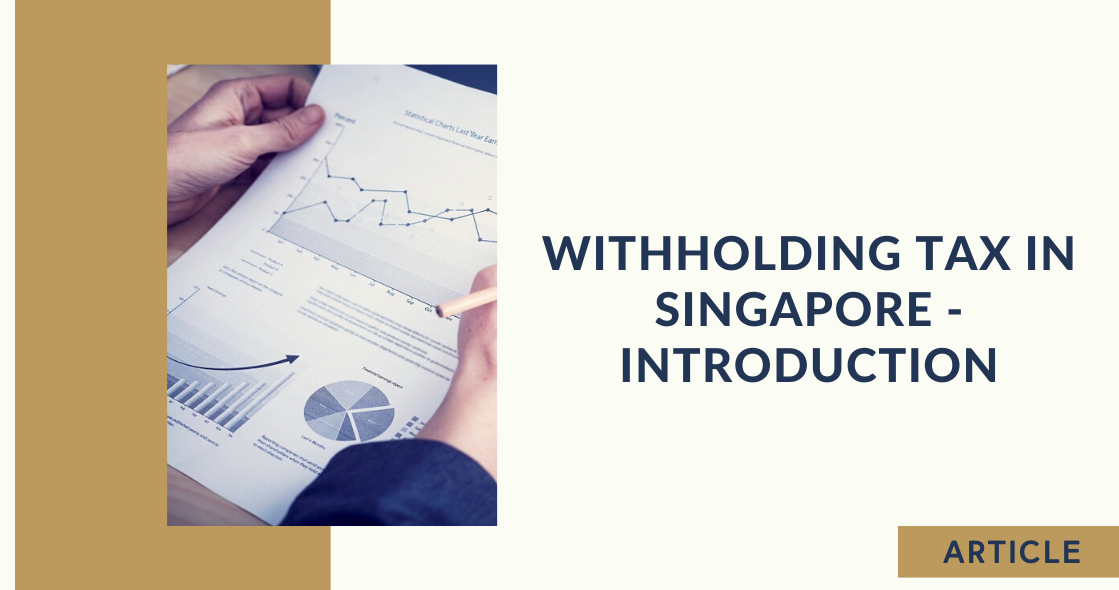 It is a mechanism (due to the nature of having to file for withholding tax and adhere to the deadlines) by which the tax on certain types of income of a non-resident is deducted at source, at a certain rate dependant on the income by the payer and forwarded to the Comptroller within a stipulated deadline.

One should ask the following questions to determine whether the payment made gives rise to withholding tax:

Singapore adopts a quasi-territorial concept of taxation; this means that income accrued in or derived from Singapore is taxable. Similarly income sourced outside Singapore but is remitted or deemed received into Singapore is liable to pay tax in accordance with Singapore legislation.

A non-resident will be subject to tax if they have income sourced in Singapore.

Section 12 of the Income Tax Act (ITA) deems certain types of income to have a source in Singapore.

Non-residents who are trading and have income sourced in Singapore are required to file a tax return. The onus lies with the payer of the income to deduct tax at the rate specified in the ITA. Section 45 relates to interest income, but also applies to other payments under Sections 45A to 45H. Section 45A of the ITA governs the system of withholding tax where the tax is payable on income sourced in, or deemed sourced in Singapore, under Section 12(6) or 12(7).

Withholding tax is calculated according to the gross payment made to the non-resident unless there are concessions given by the Inland Revenue Authority of Singapore (IRAS). The amount of withholding tax under Section 45 is not final tax, as any expenses incurred whilst deriving the income are not permitted to be deducted from the gross amount being subject to tax. Any withholding tax which is lower than 17% is the final tax amount. The non-resident responsible for the withholding tax can file for the tax return in Singapore and also claim for a deduction of any expenses incurred. For example, Service fee is not final tax as it is 17% and therefore non-residents can reclaim any expenditures accrued against the service income.

Section 45 of the IRAS

“Where a person is liable to pay another person not known to him to be resident in Singapore any interest which is chargeable to tax under this Act, the person paying the interest shall –

(iii)               Where section 43(3) or (3A) (reduced rates thus expenses incurred are not allowed for deduction) is applicable to the person to be paid, at the rate specified in that provision,

(b)               Immediately give notice of the deduction of tax in writing and pay to the Comptroller the amount so deducted, and every such amount deducted shall be a debt due from him to the Government and shall be recoverable in the manner provided by Section 89”

There is no statute of limitations and the government can go back to any timescale and withhold it.

As an administrative concession, Inland Revenue Authority of Singapore regards an individual as a tax resident in Singapore if the stay is continuous over a period of more than 183 days, spanning over 2 consecutive tax years.

When applying the quantitative test for a Company Director, only the number of days the director is physically present in Singapore should be included. Company Director refers to a member of the board of Directors in a company which has been incorporated in Singapore.

An individual who is employed or physically present in Singapore for less than 183 days during the basis period is considered a non-resident in Singapore.

Under Section 2 of ITA the definition of permanent establishment is a fixed place where a business is entirely or partly conducted, including a place of management, a branch, an office, a factory, a warehouse, a building or work site or a construction, installation or assembly project.

A person shall be deemed to have PE in Singapore if that person carries out supervisory duties in Singapore related to a building, work site or construction, installation or assembly project. There are no limitations, even if only for one day, it is deemed as having a PE; if the non-resident has an agent in Singapore who has authority to conclude contracts; keeps stocks/merchandise in order to deliver on behalf of the non-resident; or consistently secures orders for the non-resident.

Relationship between PE and Withholding Tax

The existence of PE does not affect the applicability of withholding tax on payments made to non-residents but it has an effect on the rate of withholding tax. The prevailing corporate tax rate of 17% (currently) shall apply in situations where the income derived by the non-residents is connected with a permanent establishment in Singapore.